Forage-only diet; what if I exclude grain completely from my rabbits' diet?

birdhands said:
Black locust. They love the leaves, bark, and thorns. So do my guinea pigs. They leave the branches smooth and white. I have locust coppice and hedging all over. This year I tried "shredding" a few small trees and it worked really well. Shredding is when you prune the tree to a 6-8 foot bare pole in the spring, so it sends shoots out the sides in every direction.
Click to expand...

I had heard that you couldn't feed black locust, that the leaves were toxic. Your post led me to a search about black locust as feed, as we are looking for more tree forage, besides the fabulous white mulberry. I found an article through Feedipedia (great resource) at https://www.indianjournals.com/ijor.aspx?target=ijor:ijsr&volume=16&issue=1&article=003 wihere they compare grass, mulberry leaf and black locust leaf as the forage component for German Angora rabbits. They did also feed pellets, but it was an interesting comparison. Looks like both mulberry and black locust beat out the production from grass, not a surprise as both tree species are high in protein.

Cornell University also notes that they use black locust as part of their sheep grazing program. Black Locust: A Tree with Many Uses - Cornell Small Farms I wondered about honey locust leaves, and while they are apparently used, the Feedipedia article noted that black locust was a better choice: Honey locust (Gleditsia triacanthos) | Feedipedia The more detailed Feedipedia nutrition page noted that rabbits seemed to enjoy the honey locust forage as well, Honey locust (Gleditsia triacanthos) | Feedipedia As we have both trees here, as well as white and red mulberry, that will help us expand our use of tree forage for protein.

Thank you so much for the information, I sure appreciate you sharing your use of black locust, I would never have used it otherwise, and would have missed a great resource, as we have a black locust grove in the old hayfield.
S

Estrella said:
I just purchased a book that is solely based on this! It’s a preorder but she’s sending them out 10/1. Whenever I see these topics I like to let others know about it she recently shared some of it on her YouTube and I’m pretty excited about it. Here’s the links
YouTube
Book
Click to expand... 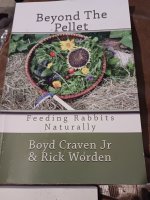 MaggieJ said:
I fed working rabbits about 1/4 cup of grain daily when they were in individual cages. I didn't exactly measure -- my hands are small, so just a small handful. They had hay free choice and I usually fed the greens at the same time as the grain, knowing they would chow down on the greens first and only want a bit of grain. It seemed to work fine.

Later when I had the rabbits in a colony in half the goose house -- an enclosure 8 feet square -- I would just put the grain in a crock. Some would eat more than others, I suppose, but it wasn't until my mobility issues surfaced, and my son, who was living here at the time, took over the feeding that we encountered any problems. He had an overly-generous hand with the grain.

Soon after that I had to quit rabbits and we sent everybunny to freezer camp. Amazingly, the buck (named Pudge because he was a singleton kit and huge as a kit) had no interior fat, but I'm sure I took a full pound of fat from the interiors of the does. Keep this in mind if you feed grain as part of a natural diet. A little can be beneficial, but too much is a real problem.
Click to expand...

I found the Beyond the Pellet book on Amazon, Beyond The Pellet: Feeding Rabbits Naturally (The Urban Rabbit Project): Craven Jr, Boyd, Worden, Rick: 9781493654055: Amazon.com: Books It was apparently written nine years ago, as this copy has a 2013 copyright date. Has anyone read this one? Is it about forage only, or a mix of grains and forage?
S

judymac said:
I found the Beyond the Pellet book on Amazon, Beyond The Pellet: Feeding Rabbits Naturally (The Urban Rabbit Project): Craven Jr, Boyd, Worden, Rick: 9781493654055: Amazon.com: Books It was apparently written nine years ago, as this copy has a 2013 copyright date. Has anyone read this one? Is it about forage only, or a mix of grains and forage?
Click to expand...