wire for bottom of cage

Hi guys, this is a post aimed at the people in the UK or even Europe. I'm in Essex England myself.
I've been trying to source wire mesh for the bottom of my intended all wire cages.
Specifically I want 25mm X 12mm X 14g / 12g.
All the suppliers I've contacted don't have it.
Does anyone have a contact where I can get this ?
Or what do other people use for the bottom of their cages ? I'd really appreciate photos.
I have a lot of stainless mesh, but it is only 12mm X 12mm X 16g / 18g, not strong enough for use on the bottom, plus poo wont drop through.
I'm intending using this mesh for the sides and tops of the cages and hanging them with metal conduit running the length of 3 cages. ( I saw this in a post by Grumpy, where has he gone ? ) Does anyone see any glaringly obvious problems with what I'm planning ? All help gratefully received .
Many thanks in advance.

Also in the UK and I've been looking too. If I come across any, I'll let you know on this thread
U

I'm still trying to find 25mm X 12mm X 12g wire mesh, BUT I have found mesh with 25mm X 25mm (1" x 1") holes Has anyone use this size mesh for the bottom of cages ?
I've got New Zealand White rabbits, will their paws get hurt or damaged with the slightly bigger holes ?
Thanks for your help .

This is the closest thing to what I use that I could find. Get it at B and Q. The screen I use is PVC coated 1" x 1/2" or 25mm x 13mm . If the wire is too thin then you can always stitch in reinforcing panels made of the same screen. cut a stretch of screen 4 mesh wide then fold in half and stitich it in with tie wire. Place it strategically and it wont catch too many berries. 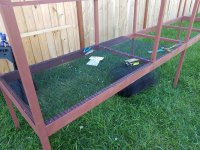 You could try contacting Brian at Grandviewrabbitry.com
He can make custom wire bottoms and ship them to you. Their web store is down at the moment so just send him an email using the contact info on his site.

The first rabbit hutch that we built had old refrigerator racks for the floor. That didn't work so well since on the young bunnies, their feet slipped through the wires and some of them ended up with broken legs. It might be the same for the 25mm x 25mm wires.

Also, on your hutch construction, the first thing that wears out is the wire floor. I've found that by building removable 'floor plates', it's easier to maintain the hutches.

There's a crossbar down the center of the regular floor plates to stiffen the floors a bit and a special dropped nesting plate is also made.

This is the special nesting plate, it has two supports instead of just one.

This is Hawaii so we don't worry about warmth, in a cold climate, there would probably be some sort of lining for the nest area.

The babies can easily get back in when they get out of the nest while they are young. We haven't lost any newborns to being out on the wire since these dropped nesting plates have been installed. Previously, with the traditional nest boxes, an occasional baby would get out of the nest box and be found later flat on the wire. Now, if they get out, they squirm around and fall back in.

There are matching 'door plates' made to match the floor plates so the whole hutch is 'modular'.

Those are set into a rack with the permanently mounted roof, back and sides to create a hutch. The nail in the bottom corner of the set of doors in back are what lock the doors shut. It's just a nail that drops through the individual door frame into the frame around the set of doors. Making the hole the nail drops into slightly larger is good, and putting the nail through a small bit of wood makes it easier to grab the top of the nail. Nailing them through a bit of scrap wood and then cutting them apart with a table saw works for the nailed knobs. Otherwise the wood splits, although you can also pre-drill them. We have a chop saw and a drill press as well as a nail gun, makes building bunny hutches so much easier.

The door and floor plates are all the same size and interchangeable so when something is wrong with one, it can just be replaced with the spare floor or door plate without having to move the bunnies out of their hutch for repairs.

The doe hutch under construction. Refrigerator racks are used for the permanent walls since bunny feet won't get trapped when the racks are used for walls and the wire diameter of refrigerator racks is thicker and will last longer. We can also get refrigerator racks for free, so that saves money. If I were making another hutch like this one, it could use a support in the middle of the span since it's about ten feet long with only a 2x4 across the front to hold the hutch floor and the floor sags a bit. Hmm, a 2x6 could be used instead. The back has the permanent walls there so there's more support there. This hutch has the doe herd in a colony of about ten on each layer of the hutch. The buck hutch is similar but segmented into six separate spaces.

Doors removed for cleaning and space reconfiguration. There's wall panels that fit between the door panels so the spaces can be sized according to the herd.

But, back to finding the right wire size, one consideration at a time. It's just that it's a lot easier to build for easy maintenance from the beginning instead of after it's been built.
Last edited: Jul 12, 2021
G

This is what I have found, its 16 gauge so a touch lighter than I prefer but it works fine for an all wire cage - mine are 3 ft by 2 ft by 2 ft. New photo by Georgia Bovenizer this is Boris (NOT named after the pm!) in his cage. Each cage has a wooden platform hung so they have two levels - 2 new photos by Georgia Bovenizer - this is the best picture I have of a rabbit on the resting platform.

Having to jump up gives them some exercise.

J-clip pliers and j-clips from ebay as well. I did wire loops and carved wooden pegs as door latches but something more proper can be gotten from ebay too.

All wire cages are my favourite kind of cage. Only one of my cages has a wooden bottom brace - adapted from a chicken hutch - and dontcha just know it, that it the one place they all want to poo, the only place it CAN'T fall through!

1 inch by 1 inch works for the walls and roof of cages BUT it lets rats have full access to the cage and you can lose baby rabbits that way as they love to eat baby bunnies! Don't risk saving the money on the larger wire, much better to bite the bullet and get 1 by .5 inch.
U

Just a quick update on wire mesh sizes. Everything that is available in England at 25 x 12mm is too flimsy, and as I have some rolls of 13 x13mm stainless steel mesh I decided adapt it. I hung two 20mm conduit pipes, then put 50 x 50 x 5mm mesh, for strength and stability. I made my cages with the 13 x 13mm but on the bottom only I hand cut out every other bar. What a perlaver ! It's a lot of work but seems to work well . So finally I have all wire cages with 25 x 13mm bottoms for berries to fall through and quite secure 13 x13mm sides and tops. Made from s/s and removable for jet washing when needed. I hope the photographs show it a little better than I've described it. 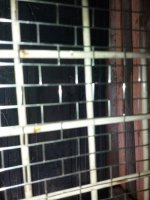 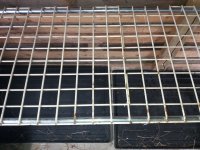 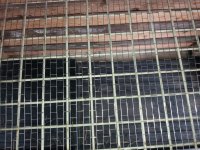 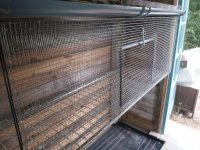