solutions for heat and pasture cages (like outdoor hutches?)

Like most of the west, we're staring down the barrel of yet another extended heat wave. This time we might reach over 105 in Reno, NV, which is high desert that usually doesn't get quite that hot (100, yes, but 105???)! Note that this is indeed a dry heat, humidity usually well below 20%. My barn rabbits seem to be pretty set with their patio misters, but I also run some growouts in pasture cages that are "rabbit tractors" that sit directly on the ground. We'd never had problems with rabbit welfare in them before, but during the last vicious heat wave a few weeks ago, we lost a whole cage's worth to the heat. It probably was due to the angle of the sun during the worst of the heat (wasn't quite enough shade in the cage), but it was also well above 100 for a number of hours.

So what strategies would people suggest for helping out the ground bunnies? The pasture is too remote to run electricity to, for fans. I could actually rig up a sprinkler to lightly douse the cages with water (they are covered, so the rabbits wouldn't get outright soaked). I also have some big ceramic tile chunks that could be deployed. We don't really have frozen water bottles in stock, but could perhaps try them if they would really make the difference.

To emphasize the difference between this situation and most - these cages are directly on the ground (see photo below, I hope). So the rabbits can nestle on the relatively cool and damp grass. But that also means there is less air circulation, possibly. And in general, I cull hard and ask my rabbits to adapt to the local environment. I really don't want to have to schlep frozen stuff multiple times a day. But this should be a relatively unusual and harsh heat wave, so I might make an exception for a few days. Thoughts? 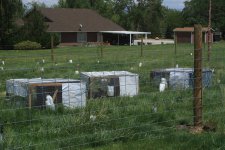 A second layer of shade, somewhat up, like parasols, or whatever. Now the suns energy gets direct to the ground and the hutches and heats the air there, it's better to block it some distance away.

I use white plastic sheets nailed to a simple wooden frame for additional shade, I also planted topinambur around the hutches, not an option there I guess.

For the record, I went with adding chunks of tile flooring (actually, I think it's travertine, according to my husband the geologist) and making sure to have additional shade on the sides/fronts (for when sun angles got low). Everybody was stressed but fine. When the high temp finally dropped to under 90 degrees, it felt heavenly!