my herd consists of 4 breeding does, living in mother-daughter pairs, the older ones are about 6 and heading for retirement in a few years.

And there's my herd buck, my 3yo free range house bunny Herr Hase. Well, he's such a friendly guy, but does seem lonely, being single and pretty much alone I might project my own feelings on him, but well, I'll try to get him a cuddlebun. I selected one of his daughters from this years litters, Dotty (5 1/2 months old now, she is a broken with two points on her forehead that made it easy to distinguish her from her siblings), she's now living in a hutch with her mom and grandmom.

I have an appointment to get her neutered next Tuesday. So, I'll take her in into a cage tomorrow, just to get her used to it for her healing time, and open that space up gradually after a week or so. I'm not sure how to train her to use the same litterbox the buck uses, I could give her access to that area while I lock the buck out of the house during daytime hours, and put her in the cage over night...
Would be easier if I wouldn't be away most of the day.

That'll be interesting. I hope she isn't as destructive as a pet as her grandmother Fury, and ther's the question if the buck will eventually stop pestering her?

I have no experience with this situation, but in my experience with rabbits in general, the buck may pester but the doe soon teaches him that NO means NO. If they are free ranging indoors, she probably won't inflict serious wounds, because he will be able to get away from her, but please make sure they are not confined in close quarters together without close supervision.

Double-check with the vet how long after surgery the doe needs to be kept away from him in order to heal. And I'd add several days to that, but that's just me.

Well, now I can't use my front door for two weeks, or so.

Herr Hase has the one side of the vestibule as base, and I sealed off a partition on the other side - that with the door - for Dotty. With hidy house and litterbox.

She's somewhat bored, but relaxed, and he didn't show any interest in the plywood wall I put up as seperator. No sign whatsoever that he would smell her, and he doesn't care the least that his environment changed. There is a wall where he used to go into the garden sometimes (uses the back door too) - so what.

I hope that's a good sign, tomorrow I will get her used to be carried in a box.
O

Good luck with the project! seems like fun and i hope it goes well! Dotty is a cute name also :bunnyhop: :bunnyhop:

Hm, I introduced her to be in a box and be carried to the vet, just to discover that I messed up dates and the appointment is actually on thursday, tomorrow. Well, no harm done, so she got a car ride in a box. Was loafed up all the time, but not
really scared, I think I picked the right girl, she's pretty cool. She doesn't mind slick vinyl flooring, and didn't show any interest in power cords yet.

She's so pretty, Preitler! And she has a very sweet, relaxed expression.

Herr Hase is a lucky boy to have such a nice bun chosen as his companion.

everything went well with the spay on thursday (120€ - did expect more but didn't ask beforehand on purpose), was somewhat worried because she didn't eat for 8 hours and didn't poop for 12h, but that seems quite normal and ok. Saturday any sign that she had surgery was gone, started to climb on pantry and window sill, and acted normally in the garden.
Today I let them both out in the garden, did work quite well. I read a lot about bonding, neutral space and such, but I thought I know him well enough and what the heck, I could put them in a roller coaster and he wouldn't act much different. He really is a gentle guy, although he is interested and followed her around with quivering tail now and then he respected it when she just hopped away when he got too close to her behind :rabbit-hop1: :rabbit-hop2: . But most of the time they grazed or chilled out

I seperated them for the night so that she gets some undisturbed rest, but I think that looks quite promising so far.

awwweee so cute!!!!!! Herr Hase is such a big handsome boy!

well, that definitly is a success story . Dotty is like her father - not interested in chewing anything, and housebroken from day one (apart from the occasional bunny berry here and there)

She's not skittish (her mother has a DON'T TOUCH ME attitude), I have to step over her when she's lounging somewhere, and she already starts to come when called (to get a treat )

Herr Hase stopped trying to hump her soon, smart guy, they don't spend all the time together but about 3/4, and when resting they cuddle a lot. It's so heartwarming to just watch them (and I can lay with them and burrow my face in their fur )

I'm so happy that I got him a cuddle bun. 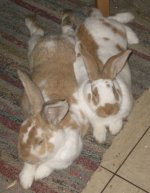 That is awesome. They look so sweet together.

So nice for all concerned when it works out like that! :bouncy:
You must log in or register to reply here.

Dead kit stuck, can use some good luck...