I have raised Standard Rex rabbits in Watsonville, CA for years. I have had a closed herd for health of the rabbits. So far that has worked pretty well, and I still have good sized rabbits. I know that eventually that can change so I would like to be proactive and introduce a couple of unrelated bucks into my herd to lower the COI.

I am interested in a harlequin buck and/or an otter buck, the more recessive genes the buck carries, the better I would like it.

I want buck(s) that are from BIG healthy rabbits and I am not in a hurry. Health is VERY important to me.

I have been surprised at how hard it has been to find Rex breeders, and when I do, I have not received many replies. It is also a challenge to imagine figuring out transport in the current "stay at home" world but I have learned that things often work in amazing ways.

I give thanks for my rabbits every day. They are one of the main things that have given me pleasure during these challenging times.

For fun, here are some pictures of a few of this years' litters 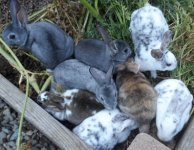 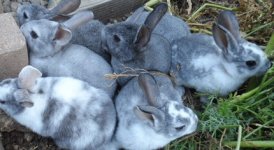 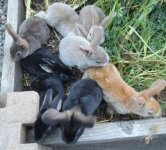 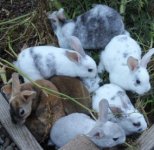 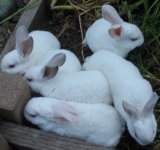 If you are a Standard Rex breeder, or know of one you can pass this on to I can be reached directly at
[email protected]

I've been thinking of adding some Rex or mini-Rex to the rabbitry here so there would be a 'pet' selection when folks want to buy a bunny. All we have are English angoras and they're not a pet bunny because of the coat maintenance. I've only met mini-Rexes - not standard Rexes - and they were some of the nicest temperament bunnies I've seen. Although, I must admit, the sample size of Rex rabbits that I've seen is really small, but they seemed a good choice as a pet bunny?

There don't seem to be a lot of Rex breeders around, though.

Yes, they are cute.
I'm calling them "dalmatian"
Such a variety of pattern. It's fun to see.

Folks used to not like the albino rabbits because of the 'spooky' pink/red eyes. This year, however, there's been a waiting list for them, I'm not sure why. We don't have that many color options, though, since it's been a closed herd for years and years and I've been losing some of the color genes over the years. At the moment, there's not any agouti in the herd, which is somewhat bizarre since it's supposed to be a dominant gene. No agouti means no fawns, lynx, reds, etc., so at some point I'll bring in an agouti buck. No chinchilla genes, no Himalayan genes, no broken.

There is the Vienna gene in the herd and I've been trying to eradicate that, but it's still lurking around. It might be easier to list the genes that are here instead of the ones which aren't. But, those are the English angoras and since they're kept for their wool, that alters the best color choices.

Most requested color is otter, usually black or chocolate

Castor is the all dominate A_B_C_D_E

Looks like folks are asking for the darker colors? The otter and castor are pretty.

There was one breeder listed for our state by ARBA, but she's no longer raising them so there goes the easy answer to finding them.

Do you often find new breeding stock nearby or do you have to ship your new stock in from somewhere far away?

I have not bought any new stock for over 8 years.
The last time I bought 2 bucks, they came from 2000 miles away and were transported here by a rabbit judge who lives in CA and picked them up for me from the ARBA convention and drove them back. We met at a central location an hour and a half drive from where I live.
I have currently sent out inquiries to dozens of Standard Rex breeders, all over the country because I would like to get a couple of unrelated bucks again.
Since rabbit shows are not happening right now, I am trusting the universe will eventually provide alternative transportation
:bunnyhop: :bunnyhop: :bunnyhop: .

Have you noticed any changes in your stock by having a closed herd for that length of time? How many did you start with? How do you keep track of the levels of inbreeding?

Did the rabbit judge drive or fly with the bunnies? We routinely ship bunnies inter-island via air, it's only a 45 minute flight, though, across the continent may take longer. So far they've all done well with flying.

We started with a mother/son 'breeding pair' that I'd not found out how inbred they were until their pedigrees showed up several months after I'd bought them. The doe had the same father/grandfather and her grandmother & g'grandma were the same so she was linebred. Mixing her with her son put it into the level of inbreeding, IMHO.

Since that 'breeding pair' wasn't gonna go very far, three pairs of unrelated English angoras were shipped in and that's pretty much been the herd we've been working with. The original buck had Vienna, so he wasn't used much and one of the three imported bucks also had Vienna so most of his offspring were sold out of the herd, too. Since then, a pair of unpedigreed but look like English rabbits were brought in and that's helped lower the level of inbreeding.

Now I'm noticing changes in the bunnies and it doesn't seem to track back to the unpedigreed ones. These are English angora and are supposed to have fluffy ear furnishings. We are now seeing bunnies who don't have the fluffy ears. Yet we haven't changed the breeding stock. Have you noticed anything like that with your closed herd?

Eleven years ago I started with a trio.
Since then, globapedigree tells me I have had 1440 offspring..
Right now I have about 8 bucks I am using and 3-4 juniors I am planning to try
I have 13 brood does and about 6 juniors that I am saving to be bred in a couple of months
I have brought in 5 unrelated bucks over the succeeding years. The last 2 were 9 years ago.
Global pedigree keeps track of the COI for all my rabbits. They are all up in the high 40s now.
I have not had any changes that seem negative.
The only thing that has shown up that is undesirable was split penis in one buck about 7 years ago.
I culled him. I had kept a doe out of him and I still have descendants from her.
It has never showed up again.
I think that the main thing I watch out for with a closed herd is loosing size.
Sometimes I have rabbits that don't make weight. I don't keep them to breed though.
I terminal cull them.
Mostly I have really good size in my stock.
If anything I have rabbits that actually go OVER the breed standard weight. I never mind that
and use those heavily in my breeding program.

So...I am looking forward to a couple of unrelated bucks. Otter, Self, & harlequin are what I am hoping for

That's a really long run starting with a trio! Although, bringing in the unrelated bucks over the years helps a lot.

I've not had much of an option of bringing in more breeding stock since incoming bunnies have to be flown to Oahu first. Once they're there, someone over there has to pick them up from the inspection desk and take them back to the airline to fly to this island. Which means two flights plus someone on another island to help. I may have a helper now, so perhaps some new bunnies can be flown in at some point. Flying inter-island is a lot easier, but there doesn't seem to be pedigreed bloodstock available in state.

I've started selecting for litter size as well as size of the bunny. Previously, I'd been selecting for primarily wool quality, temperament and conformation but not really paying attention to size. Now I've added in size of bunny and litter size. It always seems to be a fluid sort of target. Selecting for one thing and then changing to another depending on what has shown up.

I'm also trying to choose dominant traits. I've lost the agouti gene in the herd, which is really surprising since it's supposed to be a dominant.
S

I sent am email about my all black rex kits.

I wish I was closer to you...I have a few blue otter young bucks...I'm not sure of anyone out your way. Hope you found what you were looking for once shows started...I love Rex rabbits...they are so mellow and sweet...well, actually all buns are great

Question about purebred and crossbred rabbits

J
Double steel drama(long and a smidge of a rant)