Where did this infant rabbit come from?

Rabbits by Accident said:
But she didn't actually Kindle until today and we found him on Friday. Does this happen that they have one more than a day before they have the rest?

Yes, does happen sometimes, rarely, but there are reports. I would think that little one is either a runt or from the other litter.

I'm not sure it's a peanut - you would need to breed two true dwarfs to get one. If that is the case it is a possibility.
The problem with peanuts is that they don't get older than 2 or 3 weeks, a set of two dwarf genes is lethal.

But then what about dwarf breeds? Why don’t they have that problem?

Mystery solved! I believe the large white TAMUK doe had one kit about a day before she had the other nine. Here is a picture of the foundling (tan) and one of hers (white). 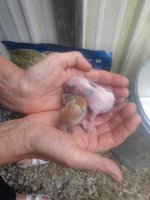 Funny how the 10+ lb mama has tiny babies and the little bitty two to three pound rabbit has big ones LOL since I have no idea how old any of them are the smaller rabbit may grow quite a bit more.

NEW RELATED QUESTION -
What would I do if I had not had a another doe with babies at that time? The mother of the foundling had not made a nest or pulled hair. In the future should I just put the baby in her box? Would this motivate her to take care of it? Or would she just eat it?

Thanks for all the help and knowledge that is shared here!

ThunderHill said:
I've had one instance where a doe kindled two on the wire a day early with no nest building, then built her nest beautifully and kindled several more the next day. So I guess it can happen.
Click to expand...

If you don't have other does with babies do you just leave them with the mother and no nest? I need to know in case I don't have another litter to put it in with next time.

Rabbits by Accident said:
If you don't have other does with babies do you just leave them with the mother and no nest? I need to know in case I don't have another litter to put it in with next time.

In this instance, we had saved some pulled fur from a previous litter (we had read its good to keep some on hand for just this type of thing), and we built her a nest with fur in the box and put the kits in it. She pulled more fur and had the others fine the next day and worked around the early babies. Maybe we just got lucky, but everyone was okay. If I'd had a doe to foster then to instead, I probably would have.

I would put them together. I've noticed when my does feed their babies they don't stay long. They just hover over the nest and let them nurse and then hop away. A peanut, if you haven't gotten an answer elsewhere, is what they call a kit that gets two dwarf genes. They tend to be smaller and a bit malformed and don't live long. My first litter as a breeder, I didn't know she was pregnant so it caught me by surprise too. I found 4 kits on the rocks outside the nest when they were three days old. The next day I found a fifth outside of the hutch. It was quite a bit smaller than the others. I would pull it out and have solo feeds with the mom (had to hold her still to make that happen) and it ended up surviving.

Rabbits by Accident said:
If you don't have other does with babies do you just leave them with the mother and no nest? I need to know in case I don't have another litter to put it in with next time.

Another option is to bring the nest and baby inside to keep warm and put it with the mom twice a day to feed. Rabbit usually only feed their kits at dawn and dusk and ignore them the rest of the day as a way to keep predators away from the nest.

See my response below about a peanut.

yes, they have the double dwarf gene (can't happen if the parents aren't dwarfed) and they can't survive. It's inferior and will most likely pass in the first few days but they can live up to 3-4 weeks, most breeders cull them at birth

Thank you for all your replies. The little guy was doing well and then all of a sudden he wasn't. He may have been damaged from the chickens attacking him on his first day in any case he is gone. All the other rabbits are doing fine. The small black rabbit had four and the large white tamuk rabbit had 10 including him. So I have plenty to play with.

Regarding the peanut discussion, I do not have any dwarf rabbits so he can't be a peanut.

Thanks for all the help and now I know what to do next time as long as the chickens don't get to him first.

I’m pretty sure a ‘peanut’ refers to a kit from two dwarf parents, that carries two copies of the recessive dwarf gene therefore making it incompatible with life (people seem to disagree somewhat on this point but idk). I know they only crop up in litters where there is dwarfism present, so any of the true dwarf breeds.
U

Rabbits by Accident said:
We rescued 10 rabbits. One poor Little Doe had was pregnant and we didn't know it. Within 2 days, she got aggressive with her hutchmates so I moved her to her own cage. She ended up kindling that afternoon.

Three days later we found an infant rabbit being thrown around by our chickens. It appears younger than hers because it is virtually hairless.

The next morning (today) another rabbit began preparing to kindle.

So here's my actual question, I don't think that it was the second rabbit's baby because that cage is more secure and I don't see how a kit could fall to the ground. The first cage had bars far enough apart that a baby could actually fall out if it got out of the kindling box. But the baby seems too young to be the first rabbit's.

Do rabbits ever have an additional kit after the initial kindling? Because that's the only explanation I can think of.

Or, conversely do rabbits ever have a kit without nesting and then have the rest of the litter a few days later? This seems unlikely especially since that cage is pretty rabbit proof.

We put it in with the first one's babies and hope that it will survive, but probably the chickens pecked it pretty bad.
Click to expand...

Ginger had one tiny kit in the morning and literally had 2 more later mind you pulled no fur for the first one but pulled hair and had them in the box for the other 2 24 hours later … I saved the one she had.. I found it on the wire did a heating pad and home fed the first day …after she had that litter I put it back with the others and he’s just fine so they could possibly have just one and then another litter right after I was loosing my mind but it can happen first for me after raising 145 rabbits