5 bottle bull calves can fit in the back of a Dodge Journey.... just saying. So glad they weren't mine though

So far just rabbits home with me. Two full grown Newfoundlands will fit in the back of a full-size Hyundai sedan though. Also 11 six week old golden retriever puppies.
F

Six small square hay bales in a 2005 Outback wagon. One of them was my passenger.

It really limited my visibility... 0/5 stars, would not do again.

three 50lb bags of food, two bales of hay, and a dog in a 2005 ford mustang the guys at the feed store looked at me like i was crazy, but this was before i had a truck and my husband was at work so i couldn't use his hatchback. carrying feed in my trunk actually broke the thing that covers the bottom and separates the trunk from the spare tire and it needs replacing...very thankful for my old pickup now haha

ozemba":3uodcalq said:
Two full grown Newfoundlands will fit in the back of a full-size Hyundai sedan though.
Click to expand...

:shock: Good to know!!! My newfie can barely squeeze into the back of our ford taurus station wagon.

Zass":388da9t1 said:
:shock: Good to know!!! My newfie can barely squeeze into the back of our ford taurus station wagon.
Click to expand...

I love them they are big goofballs.

Zass":20nmakwn said:
:shock: Good to know!!! My newfie can barely squeeze into the back of our ford taurus station wagon.
Click to expand...

I love them they are big goofballs.
Click to expand...

We have the newfie, and a little pom-chi. (I swear we didn't do the big/little dog thing on purpose.)
When my little girl was 6 we let her choose a puppy of any breed she wanted, and she wanted the biggest fluffiest, nicest dog she could find. Our "Epic Drake" is 7 years old now, and the only puppy I've ever bought. Absolutely worth every penny, as he's always been everything a newf is supposed to be. 100% bombproof good dog. 100% Safe with all other animals, as was my old pitbull.
Drake is getting a bit of a grey face now. 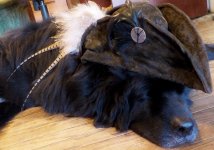 Our teeny little pomeranian chihuahua mix, Djenna, has only been with us for about a year and a half now. I brought her into to the family because I was devastated after losing my old pitbull, who always slept beside me.

Djenna was a previous brood dog who changed hands between breeders a few times, finally ending up with a breeder who decided to pet her out. According to that women, she's about 7 years old now, she had to be shaved due to some nasty mats and fleas, had a large hernia, and it had taken her a month to develop the confidence to come out of her crate. She was only 6 lbs and 2 oz!

I never gave her a crate, allowing her to sleep beside me in my bed instead, and under my desk during the day. She loves sleeping beside me so much she will whimper to be lifted into bed if I'm ever there without her, and even lays beside me if I'm napping on the couch.
To be honest, the spay and hernia surgery didn't cost more than a puppy would have. Although she was well behaved, housebroken, and took to me instantly, it did take her a year to fully come out of her shell and become a sweet playful little energy ball for the whole family. She's a real delight to have around, and it's SO funny to see her lay next to the big guy. :lol: 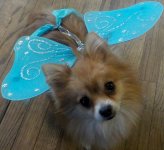 Zass, I've never been a small dog person but that little girl is adorable!

I've seen my mom bring home 300lbs of feed in the truck of a ford escort (older bit smaller version of the focus). I'd completely forgot about that. We have mostly had all trucks and haven't regretted it except when gas was $4.25/gal and hubby was driving 40 miles one way.

My sister smuggled home :roll: a 9 month old Pot Bellied pig in the rear of her Ford Escort

Many more but in vans or pick up trucks :mrgreen:

I wouldn't consider any of it odd.... Chickens, small pets, dogs...... Feed sacks, hay bales... it's pretty standard really. No matter what you put it in around here except maybe hay since it gets everywhere without a hay bale cover but short of that they probably wouldn't even have looked at us odd if we were loading things from the feed store in my sister's first mustang or my mom's restored corvette. We gave up on keeping the back of the suv clean within a couple years of it being brand new. If I ever do get dwarf goats they fit in an suv and might reach slightly odd even for agriculture areas. Not having your rear view mirror is a normal day of the week. I don't even realize it until my husband complains he can't see. So? You stuck wood, dogs, and hay in there. Of course you can't see. And next week it might be the hardwood desk, old file cabinets, horse tack with saddles to the roof, we need a new queen box spring... I learned how to work around blind spots on a large truck even without all the mirrors. When I went to get my driver's license in a large truck the lady doing testing at the dmv was surprised it was the smallest vehicle my family owned and had to alter the test route because it was not possible to get my truck out of their parking lot the usual direction.

Not quite as exciting as a pony, but I once managed to fit 5 bales of chopped straw in my tiny old ford KA. I also ended up taking 5 35kg horse stable mats (6x4ft) home in that car too, with my brother in the passenger seat. Poor car only just managed that one. I regret not having a photo of that!

My average 2x monthly trip was 4 bales of bedding in the boot, big sack of carrots squeezed down the side, with 3-4 sacks of feed piled on the passenger seat & footwell.

Photo is before I worked out how to tie the boot open with baling twine so I could fit an extra bale in.

Typically now I have a much bigger car... I don't have horses xD I do miss that KA though, brilliant little car.

I'm just picturing the cop that pulls him over! lol :lol:

I've put 4 people and 5 bales of hay in a Honda CRV
and my van will hold 5 people and over 42 rabbits in carriers!

Lol sarnia tricia. I had a person put 2 goats in a convertible one time that was purchasing from me. I was hesitant to let them go but he assured me they were going to a great farm with plenty of pasture.

I had a 1980 Chevy Chevette I put three bales of straw and like 8 50 pound bags of grain in. That was exciting.
You must log in or register to reply here.

I
How Do You Get Water To Your Rabbits?