I will be the first to admit, I do not understand the coloring of rabbits.
I have a litter of bunnies that are a quarter mix of Rex, Chinchilla, Flemish and Harlequin.
The babies are all so different. The runt had a G on her side. It was so cool. Unfortunately, she did not survive. She just couldn't seem to thrive.

I don't know what color the mixed grays would be called. Are they a Magpie or ??
I appreciate your help. TIA 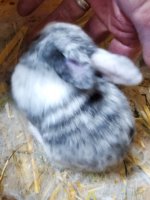 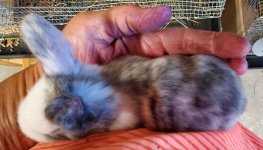 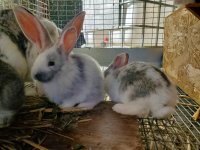 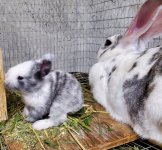 Magpies and broken chinchilla and solid chinchilla. The picture are quite hazy. If you could get a picture of each rabbit that would be nice.

Most of them are Magpies
J

Yup, magpies. The harlequin gene is coded e(j)--the lower case 'e' shows that this possible outcome on the 'extension of color' gene is recessive to other possible choices (called alleles). The 'j' part is because this pattern was originally called Japanese pattern. In harlequin, the agouti bands of color that are all on one hairshaft, the main color and yellow (fawn) bands, are instead spread in separate patches on the skin. Sometimes in splotches that change position right down the center spine (called bars), sometimes in stripes (called bands), sometimes just intermixed like a roan horses (called brindle), and sometimes just in a random pattern.

Chinchilla is a choice (allele) on the 'C' Color gene, where there are five choices in descending dominance. The most dominant, coded with a capital letter, is C for full-color. These are all your 'normal' colors like chestnut agouti, opal, lynx, tortoiseshell, black, lilac, chocolate, harlequin with fawn background, etc. Their genetic color possibilities of both dark (black, blue, chocolate or lilac) and yellow (fawn, cream, orange, red) are fully expressed. Chinchilla is the next allele down, coded c(chd) for 'chinchilla dark'. Here, the yellow pigment factory is shut down, but the dark pigment is still fully produced. So, a rabbit with chinchilla as the dominant allele has the normal agouti hair color on the outer agouti band (chocolate, black, blue or lilac), but the fawn middle band is now pearly white instead.

Translate that to your harlequin patterned rabbits, and the background that would have been fawn, is now pearly white, so you have the bars/bands on a pearly white background, which we call magpie.

You also have the dominant broken gene, coded En because it is the primary spotting gene in the English Spot breed. It takes whatever the color pattern is, and breaks it up with splotches of white (which is why it is called 'broken', the pattern is broken up with white). Regular harlequins (main color plus fawn) are called tricolor when broken up with white, as they are now main color + fawn + white. However, this is a problem with magpies, as it isn't tricolor, just color plus pearly white plus white, and you just end up with what looks like a mis-marked magpie pattern.

Look at the striping on your magpies, and on the ears. The kit with black striping would be called a black magpie. If the stripes were chocolate instead, it would be a chocolate magpie; same goes for blue or lilac. The pattern is quite striking in magpies, as the difference between color and white is so clear. My chocolate/fawn Angora harlequin rabbits tend to get their colors muddied together, if you took a black & white photo, the colors would be of about the same intensity and not show up at all, while a chocolate/pearl white mix would be very noticeable. The pattern sure is cute, isn't it?

Thank you everyone.
The whole litter and my favorite bunny! 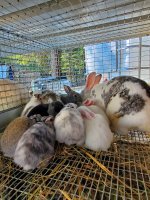 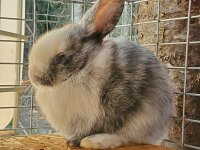 Looks like you have one solid chestnut, two broken chestnuts, two whites, one black, one chinchilla, one black magpie, and one lilac or blue magpie.

Cosima said:
Looks like you have one solid chestnut, two broken chestnuts, two whites, one black, one chinchilla, one black magpie, and one lilac or blue magpie.
Click to expand...

Actually I think there are two chinchilla. The lighting on the closest one makes him look chestnut but he is mostly chin. ?? Here is a close up. 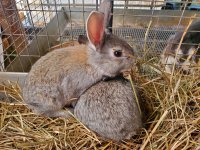 That looks weird. It looks like a chin but it has otter markings and it has blue eyes so maybe lynx? Has the kit been in the sun a lot?

Cosima said:
That looks weird. It looks like a chin but it has otter markings and it has blue eyes so maybe lynx? Has the kit been in the sun a lot?
Click to expand...

No, not a lot of sun. Most of this litter has blue eyes. Do both parents have to have the gene for blue eyes? I believe they do for REW and there are two of them in this litter. First time paring these two. I love the crazy colors.
This broken has chestnut and gray color with blue eyes. ?? 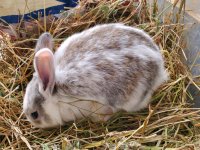 Blue eyes comes from the Vianne gene (And something else I think? But I can't remember what)
A

Chinchillas often have blue or blue-gray eyes; it's one way you can sometimes spot a self chin.
A lot of chins start out with rusty coloration, especially across the back, which eventually molts out.
Otter markings are the same as agouti markings... Otters are basically midway between agouti and self: self coats with agouti markings.

Alaska Satin said:
Chinchillas often have blue or blue-gray eyes; it's one way you can sometimes spot a self chin.
A lot of chins start out with rusty coloration, especially across the back, which eventually molts out.
Otter markings are the same as agouti markings... Otters are basically midway between agouti and self: self coats with agouti markings.
Click to expand...

What do you mean by self chin?

Buknee said:
What do you mean by self chin?
Click to expand...

A self chin is a rabbit with two self genes <aa> plus at least one chinchilla gee <cchd_> It looks like a solid colored rabbit even though it carries the chin gene. To be an actual chichilla, the rabbit needs both the gene for chin and at least one gene for agouti. I guess a standard chinchilla should probably be called an "agouti chin" except that chinchilla is, by default, considered an agouti color.
The chinchilla gene <cchd> blocks expression of yellow pigment. In an agouti, e.g. a chestnut, the fawn ring turns into a pearl ring, and brown eyes can turn blue-gray, giving you the classic chinchilla rabbit. However, a self rabbit has only one color in its fur, so the chinchilla gene has no effect on the fur color. The only thing it can do is turn the eyes blue-gray. Sometimes it does, sometimes it doesn't...and sometimes the eyes are blue-gray for the first few weeks/months, but then turn brown as the rabbit ages. I have found, however, that their brown eyes are never really the deep brown of a "real" black.
Self chins can come in any of the base colors (black, blue, chocolate or lilac) since it's a combination of self <aa> and chin <cchd_> Blue self chins are almost impossible to spot since their eyes are already blue. The only way to be sure of them is knowing their background and/or test breeding. I found out that 4 generations of "blue" satins were actually self chins when I bred one of the bucks with a NZW and the entire litter was chinchillas. (The chin gen had to come from the buck since the NZW was <cc>.)
Incidentally, the same chinchilla gene <cchd> is responsible for silver martins. They are otters <at_> with the yellow pigment blocked, hence silvery markings instead of tan markings.
Last edited: Sep 10, 2022
A

Cosima said:
would a self chin be so light? a self chin is a chinchilla that looks black.
Click to expand...

Self chins can be black, blue, chocolate or lilac.
I did not mean the agoutis pictured above are self chins; they are not selfs at all. They look to me like chinchillas with that rusty tinge babies sometimes have and molt out. The questions was, what could cause the blue eyes - that's the chin gene which those babies apparently have.

The broken chestnut looks like a broken chin.
A

Yes, opals are supposed to have blue-gray eyes. But that is due to the dilute genes <dd>, not chinchilla.
By the way, chinchillas can have either brown or blue-gray eyes. In Satins, brown eyes are preferred but blue-gray are accepted.

Can opals have brown eyes because I have a opal with brown.
A

Cosima said:
Can opals have brown eyes because I have a opal with brown.
Click to expand...