:gnight: So we have been nursing our buck who is in quarantine along, and in some areas hes better, others not so much. its been a couple of weeks since his symptoms started, and we have had him for about 6 weeks. He had come out of the 1 month quarantine, not looking too bad and I allowed all three does to breed with him. He did great, fell of each 3-5 times. Then a few days later started exhibiting some interesting symptoms, which I seem to be honing in on thinking its probably vent disease. I have been treating with 1/4 ml penicillian G Procraine daily for 10 days. His improvement is really slow. At first it looked like bad scabs but no bleeding or lesions, just bumpy hard scaby skin most noticeable on his nose. I have been checking his genitils and they had the same dandruff type scabs but didn't look bad actually on the penis, just the skin surrounding it. Today I checked and hes really swollen all over down there, looked to be having trouble pooping as some was stuck 1/2 in 1/2 out. Hes eating and drinking and not acting too bad, but I think I am about to put him out of his misery. I have continued to experiment with treatment just in case others come down with it too. So far, everyone is fine but its been 2-3 weeks since they were with him. Here are some pictures of what it looks like. If it is vent disease, is it most likely curable? Or do you think its still something else? Advice appreciated! Really worried for the rest of my buns! 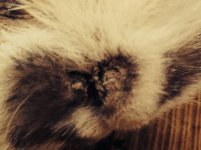 No idea, sorry, but poor guy.

Thank you, it's puzzeling and I am really worried for the girls......

It almost seems like his skin is getting better in places but he's loosing a bunch of his hair, is that normal as he's healing? Also, anyone know what the exact treatment of Pen G should look like? I am giving it daily.....but not sure if I should do something different? Want him to get a full treatment and it's my understanding if it's vent disease he should fully recover, right?

Also, can this stay dormant? I have had all three girls for months so could he have caught it from them? None have any symptoms. Or did he come with it? I am debating on weather or not to flag the fb ad that I got him from.....it's been 2-3 weeks so how long til the girls may have symptoms if they get it?

I've been thinking on this.. could it be fungal???

That is possible. We live in the south and it's already humid here. He came all dirty, looked like others had been spraying on him which would be a perfect breeding ground for fungus. Problem is when I tried to put athletes foot cream on him he licks it off, and I am not sure how to cover him with it? He needs a cone like dogs get! Would you keep trying with the cream? We have a small bunny business with 3 does and this 1 boy, and I am only trying to treat him to see what works in case one of the girls comes down with it, other wise he would already be gone....update! I just found pics of fungal infection and it totally resembles those. I looked last week and couldn't find any rabbits, I think that's it! I am going to go that route now and see what happens, it's possible I may get lucky and it's not contageous!

they do sell really really small cones in chihuahua size (any pet store), only thing is he can't eat his caecals. So you might want to try applying it slightly later in the morning with the cone and then remove the cone in the evening (giving the medicine time to work) though there's no real telling when he's accustomed to eating his so just check to make sure none are left laying around. Or, and this will likely be more useful as a treatment, you can try blue kote instead which IS an antifungal and bitter in taste and can't just simply be licked off. 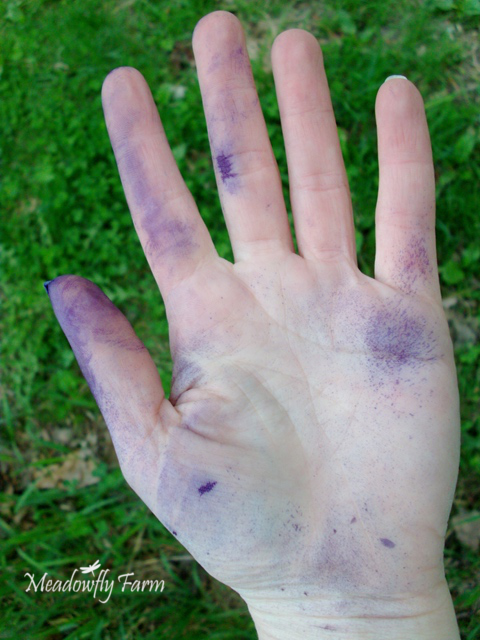 Not my pic obv. but I've been guilty of this one myself several times. :roll:

The stuff is used to treat thrush because it can be applied directly inside the mouth and not get washed away.

I second the Blu-Kote! I would definitely try to get the brand Blu-Kote, too, as I believe it has a higher concentration of the medication than, say, Wound Kote Blue Lotion does.

Nu-Stock is another anti-fungal most animals won't lick. It's messy. Of course, Blu-Kote's messy as well, as you can see in Deer Heart's photo. Don't think you're safe just because it's dried, either. Nu-Stock does not dry, so... yeah, it's messy.

If it is a fungal issue, the antibiotics could actually be making it worse.

Got some blue kore ordered on Amazon. I hope it does help because I just feel like he's got to be living uncomfortably. I mean, I know he's still eating/drinking/pooping, but it just looks miserable! I am not sure of its the brand name-it was called "Naylors Blue Kote" but hope it works!

That's the stuff! Hopefully, it's just what he needs.

After seeing Deer Heart's hand, it should go without saying that you do not wear anything you do not want stained when you apply this stuff.

Miss M":bsa0qwy3 said:
That's the stuff! Hopefully, it's just what he needs.

After seeing Deer Heart's hand, it should go without saying that you do not wear anything you do not want stained when you apply this stuff.
Click to expand...

It does not come out of jeans! :lol: :lol: Thankfully they were one of my older pairs :roll:

So I am thinking dollar store rubber gloves and old jeans and shirt. When i tried putting the the athletes for cream on, it seemed like it was difficult to get it on the skin, because of all the hair. Is it easier with this stuff? His mouth healed quickly with the cream because he licked it all off but the rest of him still had white crusty patches.....so weird! Glad his 18 babies and their moms are doing ok so far! <br /><br /> -- Wed Mar 30, 2016 8:51 am -- <br /><br /> We got the blue kote and he's purple now, can you tell me when I can expect to see results if I keep applying it daily?
Share:
Facebook Twitter Reddit Pinterest Tumblr WhatsApp Email Share Link