so I've had a reoccurring issue the last 3 litters my rabbits had. essentially, pretty much the day before they open their eyes my kits will start having inflamed vents, will get diarrhea filled with mucus, and will eventually die within the week. I've had some litters survive, but the litter before this current one was all lost to this illness. I can only assume this is some sort of enteritis? as of right now the issue has appeared in 1 litter, with 4 out of 9 kits showing signs as of now, when yesterday and early this morning none of them were showing signs.

quick run down of what I've tried so far: treated for coci (livers are clean), changed to a better feed, and switched the dam to filtered water (my tap water is so bad it makes my cats vomit). none of these seemed to help.

I'm wondering if maybe it might be an issue with cleanliness? the cage that the dam and litter are in has a pretty thin droppings pan, and because the dam only poops in one corner (and tends to poop A LOT), the corner tends to fill up faster than I can clean it. I'm thinking that maybe this is why the issue tends to start around the time the kits start hopping out of the nest. right now I'm waiting for a deeper droppings pan to come in the mail. I've pulled out the sick kits and am going to wash them and keep them pulled on clean bedding. 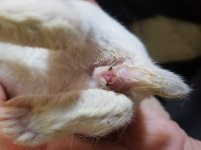 honestly.... I think it's still cocci. The intestinal variety not the liver type.

Can you get medicated feed?

If you have wet/dirty spots in your cage you either need to step up your cleaning routine, spot clean your cages daily, and/or add a layer of hay to your cages and aim for a deep litter bedding to help keep your cages clean and dry. Wet spots in cages are deadly for rabbits.

Do you use water bowls or bottles?

I've had a lot of success using BOTH. Some kits can't figure out water bottles until they are older, so using bowls helps those kits out. diarrhea kills kits quickly so you need to find a way to maintain their hydration levels while their bodies fit illness.

You might find it helpful, if you can find it, to move your rabbits with kits onto a medicated feed.

thats the part that confuses me. when this issue had first started up i had assumed it was intestinal cocci because i never saw spots on the livers of kits that had survived that i had processed to eat. i treated all of my rabbits with water dosed with amprolium a while back, which as i understand is used to treat intestinal cocci in rabbits. i saw no difference in condition in my adult rabbits (they all seem healthy and of proper weight so no surprise), and the issue with the kits continues.
an important thing to note, the kits are not even close to being weaned. they are 11 days old and only a few have opened their eyes, so im not sure a medicated feed would help, at least not these particular kits as of right now. im not sure if any medication the dam eats is able to transfer to the kits in her milk, or if it would harm them in some way.

I have all of my rabbits in wire bottom cages so wet bedding is not an issue. as for water i use bottles, but i put out bowls for the kits once they start walking around.

do you think i should continue treating for intestinal cocci with a different medication?

The only other possibility I can think of here would be bacteria, or perhaps mold toxins but only IF they are nibbling moldy hay in the nestbox.

so little update. the 4 that i pulled out are still alive, and 2 of them seem a lot better than yesterday. ive been making sure they get fed and have been cleaning them all day as they are extremely messy and sore looking. ive been monitoring the remaining litter all day, and all but one of them looked to be doing good. whatever this is it happened fast. i checked all of the kits, all of them looked clean and energetic, and then an hour later there was one with an extremely dirty vent and what looked like vomit on its mouth. i am unsure if this is actually vomit or just from the kit trying to clean itself as it had a similar color as the stuff on the vent. it was having a difficult time breathing and was a bit blue so i culled it. probably going to check inside of it to see if theres anything visual i might be able to catch.


Zass":48ovwr3j said:
The only other possibility I can think of here would be bacteria, or perhaps mold toxins but only IF they are nibbling moldy hay in the nestbox.
Click to expand...

im starting to think it may be bacteria. this litter is in a stacking cage thats supposed to be for heavier rabbits, but the floor seems just slightly thinner than the 14ga grow out cage i have. ive been watching the mom all day and from what ive noticed if she sits in certain spots it pushes the floor down enough that its nearly touching the bottom of the pan. if she has pooped in that area then its low enough that pushes it through the floor. im thinking that its likely that the kits might be rubbing their vents over this and introducing bacteria.
checked the timothy again, no musty smell as far as i can tell, it smells fresh and sweet. its kind of dusty though because i can only get compressed bales in my area

Edit: so i did a necropsy last night. checked a doe and a buck kit i had culled because of how bad they were. everything in the doe looked good and healthy, except for the uterus. it was filled with so much clear liquid it looked like it was going to pop. bladder membrane looked normal. everything in the buck looked good and healthy as well, except what i assume was the bladder. whatever it was it wasnt the testes or intestines. it was long and white, led to the vent, and looked like it was filled with pus, but nothing came out of it when i opened it. honestly it looked exactly like what testes look like on full grown males, but there was only one, and developed testes on a kit this small would be impossible.
im assuming this is some sort of bacterial infection.

That's frequently about the age where a litter can really mess up their nest box by peeing since it seems sometimes the doe will quit cleaning them around that time. In a solid bottomed nesting box, the pee will get everything soggy since at that age, the kits aren't old enough to go out of the box.

We have wire bottomed nesting boxes so all liquids fall through. There's three feet of space under the hutches so anything that falls thru stays gone, too. Doesn't sound like that would be an option for you, though, with shallow drip pans under the nests. Can you scatter some sort of small blocks (Leggos come to mind) under the hutch wire to keep the wire from deforming down to where it touches the drip pan?

you might try tipping the nestbox on it's side. That gives those young kits a place to hang out in without being in the wet of the nestbox.

OR... switch the doe into a different cage that is better suited to her.

so as of now i havent lost anymore kits. the deeper dropping pan came in the mail the day after i made my last post and it seems to have helped quite a bit. i still have some kits that are messy, but not nearly as bad as before. thanks for all of the recommendations.
im crossing my fingers that the worst of it is over at this point. about half of the kits in this litter are underweight and scrawny so im expecting to lose more, but they arent super lethargic so hopefully they make it.

How are your kits doing? Did they make it?

Last year I had a problem with kits, and whole litters, dying with diarrhea.
It was REALLY DISCOURAGING!
When I decided that it must be coccidiosis, I treated the whole cage with amprolium for 5 days.
Then when the litter was weaned/gone I pressure washed the cage and the nest box and sprayed both the cage and all surfaces of the nest box with full strength household ammonia, which I let dry for at least 45 minutes before using again.
I haven't had any signs of the problem for this year and am SO RELIEVED!

Lewis said:
How are your kits doing? Did they make it?
Click to expand...

they did! i lost 1 more since my last post but now the remaining 10 kits are doing extremely well

caroline said:
Last year I had a problem with kits, and whole litters, dying with diarrhea.
It was REALLY DISCOURAGING!
When I decided that it must be coccidiosis, I treated the whole cage with amprolium for 5 days.
Then when the litter was weaned/gone I pressure washed the cage and the nest box and sprayed both the cage and all surfaces of the nest box with full strength household ammonia, which I let dry for at least 45 minutes before using again.
I haven't had any signs of the problem for this year and am SO RELIEVED!
Click to expand...

once these kits are weaned and sold ill be cleaning their cages down with ammonia just to be safe, though i do not believe it to be any sort of coccidia

M
Kit but no nest?