Information About Gastrointestinal (GI) Stasis in Rabbits Courtesy of Animal House of Chicago.

I'm firmly of the opinion that GI Stasis, or random gut issues, that pop up in rabbits is a latent form of coccidiosis. I've talked with vets and vet techs online about this and they pointed me in that direction.

Treat for that... your ENTIRE HERD, keep your cages VERY clean. DO NOT allow for wet spots in your cages where hair and bodily waste collect, not even one day. Treat any rabbits that come in and PLEASE... ISOLATE THEM for at least a month before letting them anywhere near your current herd.

Gut issues also tell a person about the immune system of a rabbit. Do not breed rabbits that get sick EVER. Doesn't matter if it's nestbox eye, poopy butt as a kit, a random sneezer, etc. Just don't breed them. It's all immune system stuff and you don't want to breed that into your lines. If you have a doe whose kits get sick or die randomly... stop breeding that doe. (unless of course, it's a management issue in which case fix the problem).

It is most likely related to what they are eating or an illness infecting your herd, but I just had an idea at another cause. When I first started raising rabbits, I once had a buck who passed in a very similar manner. He began to eat and move less, and his body condition gradually declined. He was still a bit active, pooping normally, and enjoyed the extra treats to get his weight back. I assumed he was being finicky about his meals. Overnight, he was suddenly exactly how you described:

temper is not eating or moving he is skin and bones and he can just about keep his head up
Click to expand...

He must have stopped eating entirely some time in the evening prior and stasis hit fast and hard. He refused any food or water I offered, and syringing him anything was not working. He, too, passed away shortly after and had air in his gut. Upon my inspection of the carcass, I discovered he had one testicle removed. He had lusciously thick fur, so it wasn't noticeable unless I really got down there and checked. I still beat myself up for not noticing. I occasionally let the bucks run around the yard and bucks are normally in ground-level enclosures. He must have gotten too close to another enclosed buck who bit him through the cage. I don't understand the logistics of reaching the testicles, but it is the only explanation I could envision. It was a painful learning experience, but I have improved my rabbitry and my habits from it.

My point of this is, I know you had a colony set up at one point but I haven't followed it thoroughly enough. Are your bucks housed together? Could they touch each other through enclosures? Is it possible that they have fought when you weren't watching? Having multiple deaths points to something environmental instead of a one-off injury, but it is something to consider if you have found wounds on the body.

i had four bucks together but three (mouse Temper and dark) were mus’s sons and they were always cuddling it breaks my heart to think that mus would have do everything like that. they were on the ground and I was not that best at cleaning so I am considering coccidiosis. Is it contagious?

Cosima said:
i had four bucks together but three (mouse Temper and dark) were mus’s sons and they were always cuddling it breaks my heart to think that mus would have do everything like that. they were on the ground and I was not that best at cleaning so I am considering coccidiosis. Is it contagious?
Click to expand...

First, rabbits hit maturity and puberty can change their behavior--adult bucks sometimes often do not get along.

Second, coccidiosis is a treatable disease caused by protozoan parasite (coccidia) and very contagious. It likes the tropics quite well and is carried by birds and snakes as well as mammals, and is transmitted through feces left in the soil. Animals can be asymptomatic, and then show symptoms when they become stressed or overloaded.

Mouse and Temper have not reached maturity yet. will wooden boards stop coccidia.

Cosima said:
Mouse and Temper have not reached maturity yet. will wooden boards stop coccidia.
Click to expand...

Do they stop all other animals from crossing into the space? It kind of depends. If I bird can fly over and poop in the pen, or a small snake/mouse can pass thru then no. The coccidia live in soil, and don't move around much on their own, it is more that they are moved by other things. Your shoes for instance. 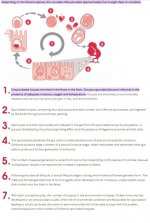 Okay. Do you have any treatment that you suggest. I don’t think that mouse and feather have it yet because they are gaining weight. They are 1.09 kg. I actually think that temper and mus had GI stasis.

Bonding (sorry for being a little scattered)

H
Enteritis but what type

S
Super Aggressive all of a sudden, need help