Raw Feeding of a Pack

I don't want to offend anyone so if I do I can remove my post just tell me.
I have a pack of 12 dogs and we are slowly getting into raw feeding. My question is what are everyones thoughts of after my grow outs are ready to harvest, can I cut them in half and feed them like that. I have been skinning and gutting/deboning them. Id like to just remove the gall bladder and then feed instead of worrying about kibble to provide the extra nutrition for them. So whats everyone's thoughts over this or should i continue to gut and skin, not deboning anymore.

When I talked to a raw feeding person a while back, she told me that they occasionally toss the pack whole (killed) chickens, feathers and all..... to help boost vitamins.
Most of the time she skinned the birds to feed....

I assume rabbit would be the same....
Personally if I went to raw, I would skin and feed the whole carcass.
(I can cure the pelts and sell, so I would want to keep those)

leaving the fur on can provide some enrichment since the dogs will have to pull it off in order to eat, but i'm with sarniatricia in that one of the reasons i breed rabbits is to tan the pelts to sell, so i would skin mine and give them without fur. there's plenty of other ways to entertain a dog imo haha. i also clean the skulls so i would likely cut the heads off too. ultimately it's the meat, bones, and other organs that are the good stuff so to speak so i don't think they'd much miss the brain and eyeballs.

i can't wait until i have somewhere to put a deep freeze so i can start raw feeding my cats/dog. they're no crazy about it now, but they also only know what raw chicken is. hopefully with some work they'll realize rabbit (and quail hopefully,) is super tasty and catch on.
S

Thank you for the replies, id still like to remove the head as its hard to cuddle with a rabbit after seeing that i would think. I dont know how to preserve my skins so i guess the dogs can have them, just dont want huge hair balls in my kennels. Thank you for the chicken idea as well, i can add that to my feeding maybe to change up flavors.

Heads are great food for dogs though. A good portion of the rabbit is it's head.

Mine have eaten 100's of heads, fur off, and I still cuddle the buns. My dogs eat everything skinned though, because they seem to have this firm belief that anything with fur on it is my property. It spares my live bunnies for potential aggression, so I guess I shouldn't complain.

My dogs have pooped fur balls :x . I had a cooler with hides and one of them wedged it open and snitched one :roll: (lesson learned! Cooler now gets set inside the basement) not to mention the feet are top on their list of favorite snacks when butchering.

I feed my dog rabbit too.
After processing for family food, I freeze the rest of the rabbit in dog size portions, bones included. So yeah, don't go to the trouble of deboning.

Taking some advice from the posts... I'm going to save the heads and feet for him as snacks too
Love this forum!!

Zass":v5mtjbys said:
Heads are great food for dogs though. A good portion of the rabbit is it's head.
Click to expand...

for $10-15 a skull im gonna keep a few of em at least ;P though maybe if i give him some raw heads he'll stop trying to eat my skull collection...

You won't offend anyone as long as you confine posts about using rabbits for food (human or pet) to the Meat Rabbits forum. When we started RabbitTalk, we wanted a site that welcomed people who raise rabbits for ANY reason: pets, pelts, fibre, meat or show. The understanding and tolerance of our members for other members with whom they may not agree has been wonderful. We all share a love and respect for rabbits, although we may use them for different purposes.

Feeding the whole rabbit actually provides a more balanced meal with meat and fat for calories, organs for vitamins and bones for minerals

There are quite a few raw feeding Facebook groups that can help with the transition, Worldwide raw feeding advice and support is one of the more user friendly ones

Awesome information. I think what i will do is keep the pelt maybe ill be able to preserve them for some use. Never though of the feet as snacks, one rabbit could go along way in the treat department. Thank you everyone, so far love this website.
N

My dogs also don`t like the fur, I think that they associate fur with live animal. Once I tricked them to eat something with fur and end up with gross, slimmy furballs..never again
R

hallo, i feed my dog's complete (young) rabbit's and the don't seem to have problems with the fur. only drawback is that the like the rabbit's so much that the want to get them there self's :evil:

I think that's part of why mine won't eat fur or feathers. They were taught not to touch the animals. We are nice to the small animals. They do not go in our mouths or under our paws. Give them enough time and they'll start pulling apart the dead body but it gets plucked out all over the place instead. They'd have a lot more food if I didn't have to take the time to skin everything and so sell off or snake food stuff instead.

My dogs consider skinned and pieced out rabbit to be a delicacy.

Most often they get only the heads, feet, and guts when we butcher.

They sometimes also get whole intact rabbits. They eat them from the inside out, leaving the pelt (cased pelt, I kid you not!) for last.

The fur does not hurt them, but it does look like coyotes have been in your yard leaving their fur-filled scat! 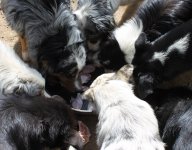 I also got into rabbits originally due to feeding our dogs a raw diet, however I learned that this is meat that I want all for myself. Sorry puppers... they don't seem to mind because they get the discards. We've never had any issues with feeding them all parts of the rabbit, dogs are carnivores after all. I occasionally will pull out a raw hide from the freezer, cut it in half and give it to my dogs to shred up and consume. Nature's toothbrushes They prefer the crunchy skulls though. We definitely feed them the bones, but of course raw only. Occasionally I'll debone a rabbit carcass prior to cooking and they really enjoy that!


Siberian Instincts":1c3is5qy said:
My question is what are everyones thoughts of after my grow outs are ready to harvest, can I cut them in half and feed them like that. I have been skinning and gutting/deboning them.
Click to expand...

My only thought on this is if you have not fed your dog whole prey before, they may not eat the rabbit if you "just" chop it in half and give it to them. They may nibble on the raw fleshy part, then roll in it and leave it. Often people have to slowly transition to whole prey by starting with skinned/gutted animals, then skinned with organs, then mostly skinned, etc... you get the gist. I don't want you wasting any grow outs because your dogs aren't used to it yet. I've got one dog (pictured) that would chow down on whole prey without a second thought, then my other dog would nuzzle it, mouth it, and think, "What a great toy Mom gave me! It even smells good! It's like a big squirrel!"

Zass":1c3is5qy said:
Heads are great food for dogs though. A good portion of the rabbit is it's head.
Click to expand...

for $10-15 a skull im gonna keep a few of em at least ;P though maybe if i give him some raw heads he'll stop trying to eat my skull collection...
Click to expand...

$10-$15 a head? Do you clean and sell your rabbit skulls? How do you clean them? I really want to use more of the rabbit for something other than dog treats, which is why I have raw hides taking up space in my freezer, "I'm going to tan them!" Though I never get around to it and the dogs get them anyway when I need the room... 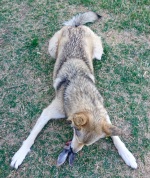 Zass":m98yrz20 said:
Heads are great food for dogs though. A good portion of the rabbit is it's head.
Click to expand...

for $10-15 a skull im gonna keep a few of em at least ;P though maybe if i give him some raw heads he'll stop trying to eat my skull collection...
Click to expand...

$10-$15 a head? Do you clean and sell your rabbit skulls? How do you clean them? I really want to use more of the rabbit for something other than dog treats, which is why I have raw hides taking up space in my freezer, "I'm going to tan them!" Though I never get around to it and the dogs get them anyway when I need the room...
Click to expand...

yep, i clean and sell them on my etsy shop. i don't have time for beetles so i just toss my heads in a bucket with some water and in about a week and a half the wild bugs have picked them clean for me. it's incredibly smelly work but my nose broke years ago, haha.

i tan too but that's way more involved yeah. skull cleaning is super simple if you can deal with the smell of rotten animal. you could always send your pelts off for tanning too if you want to use/sell them and don't mind spending a few bucks per hide. or you could sell them raw to someone to tan and use for themselves. there's people who will buy raw skulls too and clean them to sell or craft with. you don't always have to do the work yourself, but you can get a little cash and cut down on waste for sure

That's really smart! If I didn't have neighbors so close I would definitely give that way a shot, I'm very tolerant of all sorts of smells but I have a feeling I might hear some knuckle rapping on my door if I attempted, lol. "Is one of your dogs dead in your backyard???" .. "Oh, no Sir! I'm just letting a rabbit head decompose next to your fence line..." Hehe. However, I may store them when we finally get a deep freezer and then when we head out to my father's 40 acres in the middle of the woods take a bucket of them and let them get de-fleshed between visits.

U
What size cage to keep does in