I am sorry if I don’t explain this right but l will try.

So right now the rabbit and chicken situation is that there are three small houses one is occupied by lily (my only adult female rabbit) and her four, ten day old babies. The second house is split into two one sided is occupied by…(sigh). And the third house is even more of a mess but that is not what I want to talk 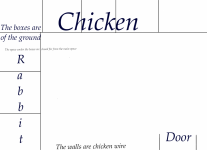 so as you can see we probably will have two sides covered in boxes. the boxes will be of the ground so under them there will be separate on the ground spot(if we need the rabbit out of the main space). there will be separations in the separate ground spots to separate the bucks from the does since I am making a controlled colony. The walls will be chicken wire and we probably will dig chicken wire into the ground. The floor of the chicken boxes will be wood so no worries no one will get pooped on lol.
I will send the measurements when I can ask my mom

what do you think?

So the entire house is 5.5 meter by 1 meter (sorry that I drew it wrong but the boxes are actually in a L shape) and in terms of the boxes it could change so I don’t think it really matters.

sorry if I confused you even more.

So, lets see, you have the chickens in boxes with solid floors. Do they stay there? And then you have rabbits in boxes with with 2 levels, so they get their own pen, plus they can be released into a "play yard" area all together?

I actually have a similar set up, but my rabbits are not in a colony. I have it set up so that the chickens are the ones that get the play yard and the area under the rabbit cages, so that they clean up the rabbits spilled food and fluff up the rabbit droppings to comost faster.

I think it will work, but given your predator situation, you may want something stronger than the basic chicken wire.

One thing that I immediately thought of that would be kind of awesome with this set up is that rabbits are more active at night, and chickens during the day, so you could probably run both in the play yard just at different times.

The trouble I have had with rabbits and chickens in the actual same space is that my chickens have always been terrified of my rabbits, and the rabbits think this is hilarious and will charge them just to get them to flap. This stresses the chickens out so much that they panic and I was afraid they would injure themselves. I am sure they would eventually sort it out, but I expect that there would be causualties, so I never let that continue past a few minutes.

This morning one of my rabbits managed to invade my hen house. I found him happily chewing a wall in one of the hen nest boxes. The chickens had scattered in a panic. He shall now be named Cadbury... 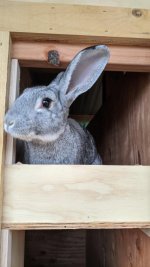 The chickens will only stay inside if ether it is the end of the month (when the snake comes) or … the chicken are almost only inside at night and there is a chance that the rabbits will always be in the play area but I don’t what the buck to be in there with them because they will probably all get pregnant. This probably won’t happen but what if I get one buck neutered so that there could be a buck with the colony with out all the does getting pregnant.

okay I started rambling but it might be a good idea? What do you think.

Generally speaking, there are concerns keeping rabbits and chickens in close quarters. It can be done, but especially in a hot climate you may have problems with coccidiosis - a parasite infection of liver and/or intestines that occurs in many species. You should read up on coccidiosis/cocci/coccidia so you are well prepared.

The standard wisdom is that you do not want chickens roosting on top of rabbit cages because their poop may carry disease. Chickens scratching in the litter under the rabbit cages, on the other hand, is beneficial to all, as Eco2pia rightly says.

I doubt there is coccidiosis on the island I live on. Do you know any other wild animals that can get.

You need to learn how to do your own research, Cosima. You live half a world away from me and in a completely different climate and ecology. You need to know that natural world as intimately as I know mine.

For starters, try doing a google search for the name of your island, Indonesia, and the word coccidiosis. Try the terms cocci and coccidia as well. I'll be very surprised if there is no coccidiosis there, but I hope you are right. Usually you can build on those first hits to develop a body of knowledge. Keep notes and bookmarks for future reference.

I am soon getting a couple of chickens....

We were just going to mix the chickens and our rabbit does together (as long neither of them are pregant or have young kits). I'm not sure if that would be okay but we did some reasearch and it says ''Rabbits and chickens are two of the nation's favourite pets, and while there are many things that set them apart, they also have a lot of similarities, and if you are careful and manage to cater for their different needs, they can actually live together in harmony''.

We aren't sure if it is going to work but we are debating whether or not we are going to try it.

I would plan to have a back up alternative for sure.

I think running chickens under rabbits in wire cages is excellent, they make a fabulous clean up crew and mine scavenge under the feeders for spilled pellets daily, the spilled hay becomes absorbant chicken bedding to scratch thru, plus my rabbits get treats from the yard and my salads, and they inevitably spill that too for the waiting chickens.

But almost any other configuration can be a little problematic. If you try it successfully be sure to report what worked!

I am actually interesting in this subject as well since we are getting our chickens soon.

Would it be okay to have pens to separate them but mix them toghether sometimes during the day?

Where did this infant rabbit come from?
2