I really appreciate the knowledge and support that is shared on this forum! I make a lot of equipment from repurposing stuff and scraps which I plan to post here. Since I've made 66 posts already, I should probably introduce myself LOL

I mentioned to my sister we needed to get a couple rabbits, maybe 2 does and a buck, in case the supply chain continues to be sabotaged. She came home with 10 rabbits, supposedly mostly female -- of course, we had not prepared any place to PUT THEM!

I should have known better. I mentioned we needed 3 chickens and she came home with 15 before we built a henhouse. She is highly motivated!! Of course, she works 40-60 hours per week, which leaves me to figure out what to do with everything by myself, but hey! We've got livestock!!

Fortunately, since she had bought out a guy that was getting out of raising rabbits, we got two 6' long cages with them. We had 3 metal dog crates, so we managed to find a place to put all of them. First we set them up on the side of the garage. One cage had 4 young rabbits, supposedly all female. One started going crazy and attacking the others, so we had to find another cage. We put her in it while it was still on the ground. She went berserk, pulling grass, running in circles - aha! she's going to have babies! So, quick, get a nest box (also sent with the rabbits, thank heaven) Within an hour she had 4 huge kits. She's a tiny rabbit! I don't know how she carried them.

Four days later, the chickens who had been running around under the cages and eating the dropped rabbit pellets found something exciting and were running around the yard with it, throwing it up in the air and fighting over it. Huh ... it's a tiny baby rabbit. ... no idea where that could have come from.

The next morning, the giant white doe started pulling hair - and ta-dah! 9 more babies! And they matched the one that the chickens had. So I guess she got a head start and dropped one the day before that somehow managed to fall out of the cage. (this has been remedied)

The mothers have been moved in a rattly utility trailer for about 1.5 hours, changed location in the yard from the side of the garage to the new rabbitry, moved from cage to cage, and moved while in the cages to different locations. I've dropped tools on the metal cages, used a hammer drill that bounced their cages around, hung really noisy feed bags around the cages to block wind and rain - NOTHING has bothered them! They are all the most laid back rabbits I've ever seen! The babies are the same, very calm, curious and super friendly!

. . . Except for a buck, that looks different from the others . . . . he's a tad mean LOL Well it could be because he was identifying as one of the 4 girls ... until I realized he wasn't and he got put into his own cage. He is probably still miffed with me because he lost his harem. My step-daughter named him "Bob" which is short for "Kabob" which he will soon be if he doesn't straighten out his attitude LOL He would like his pronouns to be "she/her" so he could go back with his roomies hahahaha

They are nominally TAMUK - the giant white doe is 100%, the others are at least 3/4. However, since it's composite, and they would be mixed with perhaps Californian, not sure how that will affect anything. We are in central Texas and it gets over 100' in the summer, I'd like to try to get going with that breed as they are supposed to be very heat tolerant. 50 years ago I had Californian rabbits, I was in Virginia and heat wasn't an issue.

My neighbor just got a big Tamuk buck, and I plan to mate our doe with him and when the kits are old enough, I will get rid of the other rabbits, and only keep the Tamuks. At this point, I have 4 does that I plan to breed maybe for spring. Right now nobody is bred and the babies are about 8 weeks old.

So, there you go, you now know the tale of 24 "Rabbits by Accident".

@Rabbits by Accident thanks for the background info! I live in the UK and have only recently heard of Tamuk rabbits..do you have any photos of yours?

That is really funny

EastNeukRabbits said:
@Rabbits by Accident thanks for the background info! I live in the UK and have only recently heard of Tamuk rabbits..do you have any photos of yours?
Click to expand...

They are a composite of many kinds of rabbits until they got some that were very heat tolerant. I believe they have been recognized as a breed? Really, I'm not the one to answer this, I just started out with them. They are pretty big rabbits, about 10-12 lbs, and the stuff I've read said they only have an average of 6 kits, but mine had 10 and they grew like crazy.

At birth, they were 1/2 the size of the kits from my small rabbit (4 lbs) - but caught up and passed them by 6 weeks. If they keep going, they could be dog-sized LOL

Ok, so now that I've shown my absolute ignorance on all the questions I've answered so far, I'm off to the rabbitry.

EastNeukRabbits said:
@Rabbits by Accident thanks for the background info! I live in the UK and have only recently heard of Tamuk rabbits..do you have any photos of yours?
Click to expand...

They are SO CALM & SWEET - even the babies 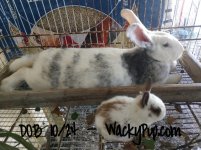 and yes, that is her poop box she is laying in. LOL 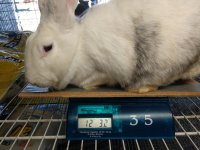 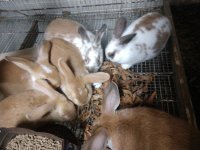 @Rabbits by Accident thanks for posting the photos, they look a good sturdy build, nice eyes! Interesting that they have been bred with heat resistance in mind, I knew there are cattle bred for hot environments but I didn’t know about rabbits too. I live in Scotland so heat isn’t really a problem and my rex’s coats are at their best at this time of year, nice and thick. And don’t worry about not having all the answers, if questioned, I’d be stymied just as easy

EastNeukRabbits said:
@Rabbits by Accident thanks for posting the photos, they look a good sturdy build, nice eyes!
Click to expand...

Calm and sweet are the two things I value most in a meat rabbit- I'm putting so much time into raising them I might as well enjoy them! I also spend more time down in the barn with them because of that, so I get more accustomed to their normal and can see any issues early on.
Everybody has different growth-rate goals. Both my Cals (from around 7-8 years ago) and my Rex are about the same weight at eight weeks as yours. For example, a recent litter of nine for a first-time doe weighed between 3lb 7oz to 3lb 15oz at 8 weeks. At 10wks, they were 4lb 5oz to 5lb 2oz (most on the higher end). By 13 weeks, they were all over 6lb (6lb 1 oz to 6lb 13oz). This was on a pellet and timothy hay diet. I am pretty happy with that growth rate. I did not expect to be able to get 5lb weights before 12 weeks.

B
Hello, Can someone please help me and tell me what my Rabbit has and what I can do to treat him?