Location
South Dakota near the river. 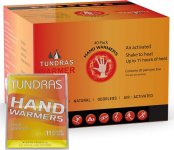 Zee-Man is dead on: those handwarmers are just iron filing sachets. The handwarmers are MUCH cheaper than O2 absorbers, but do the same thing.
For the scientifically inclined, 4Fe+3O2+6H2O-->4Fe (OH)3 is the basic formula for rust. There's 4 Iron, 3 oxygen pairs, and 6 water per molecule. That means there MUST be moisture for your O2 absorbers to work. The ambient moisture in the air is plenty for the job. I only say this so you don't use O2 absorbers AND desiccant (like silica) at the same time. They defeat each other. The hand warmers are extremely fine iron filings so they react quickly and the rusting process gives off heat. In storage, I have a few 5 gal pails with sealing lids that contain rice, rolled oats, beans, and a few other sundries. After the pails were filled, I opened two handwarmer packets, shook the sachets so they started heating, put on top of the stuff in the pail, and sealed the lid.

For seeds: a desiccant like silica to keep them dry is great. Zee-man is, again, correct. Seeds will not survive in a vacuum; they require o2.

Hand warmers cannot be used after they stop reacting. All you can do is toss them.

I am going to do the same with pelletized feed, but right now I'm using a rotational system where I buy feed, move what I have in storage to the barn, and put my new purchase in storage. Buying from a feed store instead of a farm & ranch retailer has resulted in much fresher pellets that are green instead of brown. I keep my feed in a dead chest freezer that provides dry, rat/mouse resistant storage. I just hate sending those boxy appliances to the landfill.

We also feed branches from willow, mulberry, and cottonwood (poplar), along with ditch hay and lawn mower clippings, which is easy since we have a colony set up.

If you're looking to store pellets longer-term, like you're preparing for supply disruptions that appear to be on the way, 5 gallon pails with tight lids are best. Throw an oxygen absorber in there (like one of those disposable handwarmers) and it will keep for years.
Click to expand...

Thanks. They are in Tractor Supply food safe buckets with the snap on lids. I will open and add the o2 absorbers.

i store mine in a large plastic container that the local rat population ignores.

Pellets should be used within 3 months of purchase generally speaking.

An airtight and dry metal contain with a lid should work find for storing pellets.
O

We use pellets. The bags that we buy are made to store the grain in. The grain is dried so it doesn't rot. We have 12 bags for the winter. Rodents are the biggest issue so the bagged pellets are stored in a shed that seal tightly. Open bags are in a large plastic garbage can. Both pellets n sunflower seeds.
The pellets we buy are simply ground grain. Formulated from grains that provide for the daily needs requirements. Nothing but dried, ground n made into pellets.
Also concerned about price increases n availability.
As long as you keep the bags dry and clean you should be OK.
We open feed nursing moms and friers that are growing out. And feed 1 cup per day when on a maintenance diet over winter. Buck gets 1 cup daily. Along with hay, foraging, garden n kitchen scraps. I also buy a couple bags of black sunflower seeds n feed does a bit daily. And they all get a bit 1\4 cup or so sunflower seeds in the winter as it gets cold.
So yeah my suggestion would be to get as much as you need to make the winter while you can.
Share:
Facebook Twitter Reddit Pinterest Tumblr WhatsApp Email Share Link