The previous owner told me that it is a male Turkish rabbit. When I get home I double checked and she is clearly a female. The guy is not an actual rabbit seller so he has little to no knowledge about rabbit breeds.

We have a red eyed white rabbit breed in Turkey, actually it is not actually considered as a true breed, it is the most common rabbit type, ordinary common rabbits are usually red eyed and white, so they are considered as "worthless". They are thought to be the ancestor of angora rabbits which also hails from Turkey.

This similarities between 2 breeds always make problems, many New Zealands in Turkey are mixed with Turkish rabbits. The Turkish red eye rabbits are used as a pet or as "niyet tavşanı" fortune teller rabbits. They are tamed to chose one of the papers and give it to the customer. Different fortunes and prophecies are written in the papers, so rabbit chose one of them and this paper is believed to be the your one. (It is just for fun)
The first photos are my rabbit, 4 months old female. She is bigger than an adult cat. 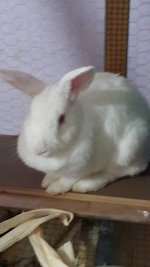 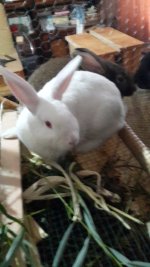 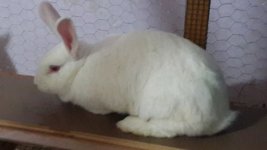 And these are Turkish fortune teller rabbit photos that I get from uncle google. Notice usually baby rabbits are used at fortune telling, not the adult ones. 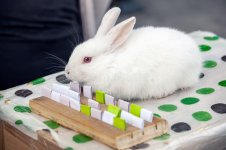 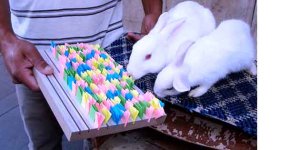 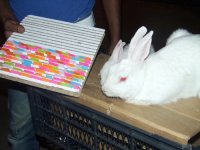 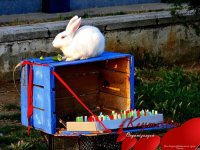 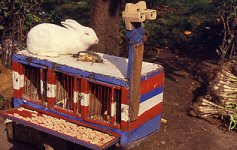 So what is my rabbit, New Zealand, Turkish or hybrid?

Some more Turkish red eye rabbits, they are chosing one of the papers that fortunes are written. Unfortunately nowadays police do not let them work anymore because of animal right activists (facepalm) 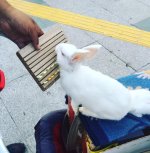 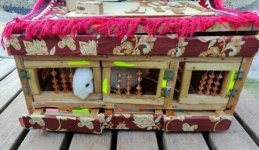 Sometimes they are used to chose lottery tickets lol. 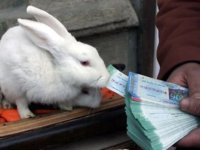 Some fortune teller rabbits from movies and serials; 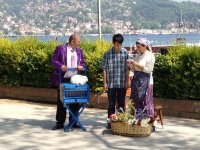 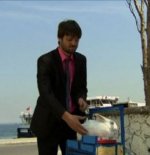 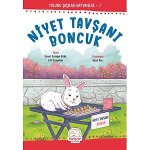 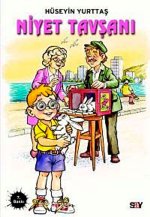 I have never interested about this rabbits but when you become a owner of rabbits this fortune teller bunnies are started to seem to me very interesting. And I don't get the logic of animal right activists, these rabbits are outside and happy with people, what is the point of banning them from streets? Totally insane.

Hang on, is that a picture of you holding the rabbit in the air by their spine?
Don't ever do that please, that's very harmful