Musings on the harlequin gene

It's been a while since I really posted, but I haven't forgotten everyone. I had to take a little break from raising rabbits for a while.

It's mine, so I can absolutely fill it with bunnies, quail, pigeons, chickens, turkey, or anything else that catches my fancy. 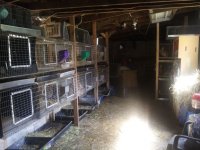 We've only been here a few months, and the the "bunny barn" is not even close to it's final form, so don't judge me to harshly. :lol: I still need to find some proper totes to put under the cages, and don't even look at the junk piled in the back. It's a work in progress.

ANYWAY, that's not what this is about.
I posted in colors and genetics because I've come up with another (harebrained?) :?
theory on how some of the harlequin color genes might interact.

I want to make sure everyone is on the same page going into this, it's gonna to take a little bit sorting out. I know that there are dilution genes, but we're just going to refer to the colored markings on a harlequins coat as black.


Generalized conjecture: (common theories, not my own)
It's believed that the gene is the same one that produces the white markings in dutch.
It is said by some to be necessary to create really good harlequin markings for show.
Other breeders cull it, and want no white markings bred into their herd.
(I do not have any stats for the show success ratio of either strategy.)

I've noticed that in other breed that have the harlequin gene, rex and lop in particular , a very spread-out brindly coat pattern seems to be preferred. My own (uneducated) best guess is that this to provide good material for the broken gene to work with, producing spots more evenly distributed across the coat.

In my own herd of japanese harlequins, I've noticed two distinctly different types of markings.
The brindly kind, that may or may not form into loose stripes, and clean, intensely colored bands or stripes.

Not all rabbits in my herd have those intense stripes. Of my babies, only rabbits that are known to carry and occasionally throw white marks also throw rabbits with the intense color bands. I believe I can even identify which rabbits are carrying the white marking gene just by looking at the black on their coats, with no white present anywhere on the rabbit. 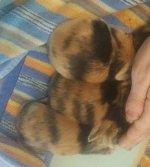 It's not a trick of lighting. Some of these markings are simply not like the others. You can tell by the intensity, and honestly by the the shade of black, which markings (I believe) are affected by the white gene. I have a kit with black on one side of the face and brindle on the other, and they look to be two different shades of black. (Only one kit in the litter had a white foot)

But, but...if the dutch gene did this, why didn't it pull ALL the black into those dark checkerboard markings, why only some of it? What causes the loose brindle? Why do some rabbits with white marks have terrible show markings?

What if, what if.... (In really simplistic terms) what if there was more than one source or pathway for the black markings on a harlequin's coat?
What if, the ej gene is non-selective, but the various white marking genes ARE selective?

Could it be that the broken gene and the dutch gene perhaps not just affect the black differently, but interact with different kinds or sources of black? Could tri color breeders and harlequin(the breed) breeders be selecting for these different "sources?"

Does anyone on here have any guesses , conjecture, or any thoughts or observations to add?

Do you know anything about pigment cell migration?

I do know that when I bred harlequins (love the breed, just wanted better size on them, a small buck messed up my herd), that I ignored the white foot factor and focused on magpies. I loved the japs, but I found I couldn't get good banding on them. The magpies on the other hand... I could. I focused on keeping those with clean banding and culling/selling those with brindling.

Doing that seemed to help my herd more than anything. Did the white foot thing mess some of them up? For sure. But since I was breeding magpies... it was less of a concern.