Introduction To My Herd

I don't think I've made a post like this, so I decided to now. I currently have 10 Netherland Dwarfs and 1 Lionhead/ (Possible) Flemish Giant mix. 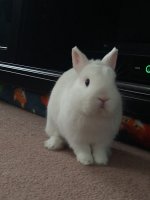 This is Russia. He is a BEW, but has a lot of other colors in his Petigree. We bought him at the last rabbit show in december for $100 (And that was at half price!) He has been bred to Cinder. [He's a sassy small guy] A little bit older than 6 months. 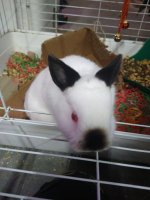 This is Pearl. She is a Himi. She's been acting like her mom a LOT lately. She had a brother named Jasper, and her parents are Natzumi and Storm. We will sell her at the next rabbit show at the end of this month. About 4 months old. 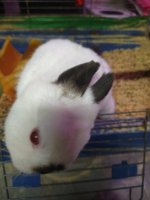 This is Whilber :] . He is also a Himi and got Wry Neck when he was about a week old. He REALLY LIKES to run around in circles. His mother is Cinder and his father is Couch. He has two sisters names Soot and Thor and had a still-born sibling named Cat. He will turn 2 in May. 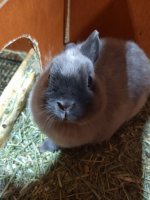 One of my breeding Does is named Yoshi Bagel. She has been bred with Ash, Storm, and Couch, but she is a bad mother (But very pretty) and her Buck is Ash. She is a Siamese Smoke Pearl and I forgot her age ._. 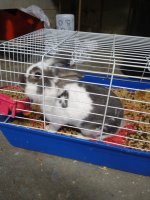 Here's Rose (His nickname is Chairman Rose). We got him from one of my Mom's work friends because their kids stopped playing with him. They had him for about five years (Almost his whole life) and thought he was a Doe. And then he turned out not to be, which I found out like a few days after we got him. He is a gray broken (Is there an official color for gray in rabbits? I've never heard the term gray used.) He is also a foster and we will put him on the Raffle Table at the next show. 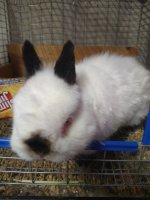 This is Jeff. He is my oldest rabbit (should turn 6 soon) and he's the scraggly old man >:] . He is also a Himi, and he is from the first litter of rabbits I bred that stayed alive. He has a brother named Butterscotch and a sister named Taffy from another litter. (I just realized that Couch and Couch's siblings are his half-siblings, sharing the same mother.) He is very scruffy because he used to have Mites. His mother is Pepper(mint) and his father is Fluffy. 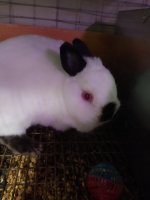 This sassy lady is Natzumi. She has only been bred to Storm and Storm is her Buck. Her mother is Taffy and her father is Pickle. She is a Himi. Jasper and Pearl are her kits. She is very grunty, because we always have that one grunty Himi Doe, just like her mother and her grandmother . I can't remember her age. 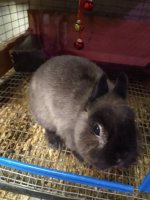 This very gentle and friendly Buck is Couch Potato. He used to look VERY pretty and one two Best Of Breed in one day. Now, he is very skinny and has gross eye boogers (He will have to be put down pretty soon, we've been meaning to do it for a while now but snow.) He is a Siamese Sable. His mother is Pepper(mint) and his father is Pickle. He has a brother named Little Fat Bob The Second and a sister named Pretzel Chips (Who we sold away with Fluffy) I don't remember how old he is. His half-sister is Cinder. He has been bred to Yoshi and Cinder. 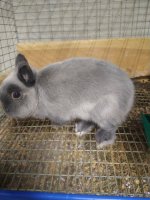 This is Storm. He is my pretty and gentle wittle boy. He is a Siamese Smoke Pearl, like Yoshi. He should be about 1 I think? His full name is Thunder 'Kachow' Storm. His Doe is Natzumi. His kits are Jasper and Pearl. He is probably my cleanest rabbit (Other than maybe Russia.) 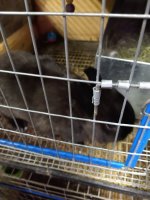 Here's Cinder. She is a surprisingly dark Siamese Sable. Her half brother is Couch, and her brother is Ash. She is 3 years old maybe? Her mother is Taffy and her father is Pickle. All of her kits that lived are Whilber, Soot, Thor, Katzu, Shashimi, and Shashami. She has been bred to Couch and Russia (I don't think I bred her with Storm.) Russia is her Buck. 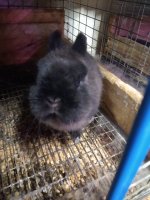 This is Ash. He is a very handsome Siamese Sable Buck. He has been bred to Yoshi and Taffy. Yoshi is his Doe. They currently have no children. He is the same age as Cinder, who is his sister. His mother if Taffy and his father is Pickle.

What beautiful buns! Russia and Storm stand out as my favourites. Such cuties

Mariah's Meadows said:
What beautiful buns! Russia and Storm stand out as my favourites. Such cuties
Click to expand...

I think that Russia, Storm, and Pearl are my favorites 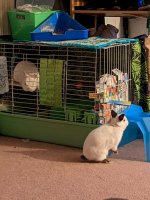 Maybe you should keep pearl then.

Cosima said:
Maybe you should keep pearl then.
Click to expand...

Pearls kinda ugly for a Netherland dwarf and I mainly breed for show, and I want someone to have to opportunity to have her as a wonderful pet

Not sure if it's the same for Netherlands, but gray in Holland's is blue, and it's the dilute form of black.

northernnevadahollandlops said:
Not sure if it's the same for Netherlands, but gray in Holland's is blue, and it's the dilute form of black.