How long to recover from heat sterility?

I have heard for years that "bucks go sterile when it's over 90 degrees"
WELL, we've had plenty of that here on California's central coast lately.
I have spent lots of time making sure that the fans are working, and my
improvised cooling system with Goodwill sheets hanging around the barn and soaker hoses
dripping water down from the roof onto them are functioning,
praying that PG&E doesn't turn off the power in the hottest part of the day
since my well requires electricity to pump and the fans won't work without it either.
I've kept lots of bins, buckets, and tubs filled with water "just in case 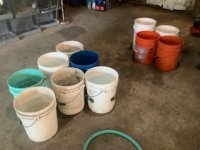 So... It looks like we will be having slightly cooler weather for the foreseeable future
Its forecast to be in the 80s, instead of over 100 like it's been recently.
I don't want to stress the rabbits any more than they already have been by trying useless breeding.

Does anyone know if there is research on this, or does it vary a lot from buck to buck?

So pg&e got you too? I'm up in nor cal and never had a problem with bucks going entirely sterile because of the heat. I use a portable swampcooler (I only have 4 breeding rabbits and an 8x12 shed with the bucks inside) so when it gets really hot I just roll everyone inside the house but for a few years I worked off of ice bottles, fans, wet towels, and frozen tiles. Hopefully the rain comes soon! What I did before the power was cut is freeze a load of applejoice bottles and pass them out to the rabbits not doing to great. You can buy a misting system instead of soaker hoses and wrap them around behind the fans. I would be more concerned about the rabbits sitting in water, hope no one gets sick. You can create a vacuum of cold air by sucking air in with fans in the windows on one side and out the other with a cold wet/frozen towel on the one sucking in

My barn is open along the sides so there is no way to enclose
the wet sheets work like you describe the towels.

I don't leave them in the water longer than it takes to get them totally wet, especially their ears.
it's pretty funny to watch them all act like cats when I put them back in their cages.
It worked well and nobody died the days I did it, even though it gt to 105 degrees.

It's been hot around here, too, lately so finding out how long a buck can be affected by heat sterility is something that's good to know. I looked it up at a university website - University of Michigan in this case: https://www.canr.msu.edu/resources/rabbit_tracks_breeding_techniques_and_management They say 60 to 90 days, so two or three months!

Sometimes bucks bounce right back after a couple of breedings to "get them started again",
sometimes they do not develop a decent sperm count again.....
When I raised rabbits in N. Ca [near Corning] I had a rabbitry, that had sprinklers on the metal roof,
swamp coolers on one end, and a big vent and an exhost fan on the other end..
all but the exhost fan, were activated by a thermostat ...
I also had a backup generator..

So how many times the buck is bred can make a difference in the duration of the heat sterility? It's still hot, but starting to cool off soon, hopefully. I'd really like to get a few litters from the buck, guess he can live with a doe for awhile to give him time to cycle into fertility again?

hotzcatz":9hltz2at said:
So how many times the buck is bred can make a difference in the duration of the heat sterility? It's still hot, but starting to cool off soon, hopefully. I'd really like to get a few litters from the buck, guess he can live with a doe for awhile to give him time to cycle into fertility again?
Click to expand...

breeding stimulates the testicles, it helps get them "back on line"..

DaffyDill will be thrilled with this plan! I'll go figure out who wants to be a live in girlfriend with him for a week to ten days.

Guess a haircut first for both of them if it's to be effective.