When I bought this little Buck he was supposed to be a Sable Chin. I’ve seen several people say they have a sable chin rabbit and I can’t figure out how that’s possible since the chl sable gene is recessive to the chd chinchilla gene. After looking at the pedigree there are no sables or seals in this boys background at all and I think he’s a chocolate chin. Am I incorrect on either thought? 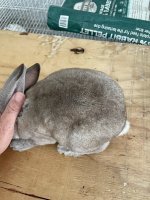 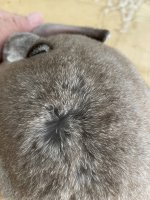 Also his sibling is supposed to be a broken seal but again no seal or sable in the background for the 10+ generations I can see. Self chin perhaps? 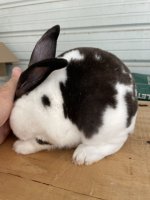 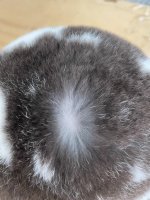 They’re out of a Magpie and a chocolate chin.
J

I can see your confusion. On the color gene, in descending order, we have full-color C (normal agouti, non-agouti self, harlequin, etc.); chinchilla c(chd) chinchilla dark; sable c(chl) chinchilla light, pointed white c(h) Himalayan, and albino REW cc. Having two alleles both called 'chinchilla'-- chinchilla dark & chinchilla light means there are some definite points of confusion. Both alleles can be the cause of pearls & ermines, as both eliminate the yellow coloring on tortoiseshells & fawns. And both can cause chinchilla patterning, because both eliminate the fawn middle band. The while both eliminate the orange/cream/red/fawn phaemelanin colors, sable also reduces the dark eumelanin colors (black, chocolate, blue & lilac). So the sables look a little more sepia, a little more shaded.

My chocolate chins look a bit different, as they are angoras. The one on the left is a black chin, the front is a chocolate chin, and in the right back is a 'rusty back' black chin (the rusty brown sheds out). 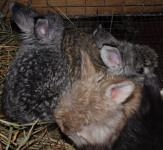 This is a chocolate chin in the nestbox, looks like a regular chocolate except for the white inner ears that tells it is really an agouti pattern. Chocolate agouti and chocolate chin look alike at this stage. 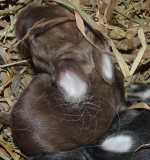 Once they get older, the color lightens on the angoras: 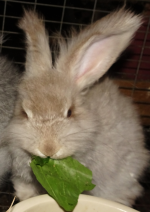 I can see why the breeder called the rabbit a sable chin, as the color looks darker brown than the usual chocolate chin I see. You said there are no sables or seals on the pedigree. What about pearls or ermines, which could be either sable or chin based?
J

I'd forgotten you said one parent had harlequin (magpie, which is harlequin + chinchilla/sable). When a rabbit carries harlequin as a recessive, the colors can be very skewed. I couldn't believe how much harlequin in the background can change normal colors into bizarre ones--some look like they're steel, some have very muted harlequin patches, or you can get harlequin brindling where the agouti markings should be. The colors came out odd as well.

Anyway, there is a simple test for chocolate non-agouti self, chin and sable. When you shine a light near their eyes, they tend to reflect back red. That technique won't work here, as chocolate, chin and sable will all do it, so we can't use that to differentiate between them. Another seal technique is to look at the fur under the foot pads. On normal blacks, the fur here is usually gray. On seals, it tends to be sepia brown. Of course, if the rabbits like to make a manure pile. . .it's going to be brown no matter what. Another test that isn't foolproof.
A

nvstickbow said:
When I bought this little Buck he was supposed to be a Sable Chin. I’ve seen several people say they have a sable chin rabbit and I can’t figure out how that’s possible since the chl sable gene is recessive to the chd chinchilla gene. After looking at the pedigree there are no sables or seals in this boys background at all and I think he’s a chocolate chin. Am I incorrect on either thought?
View attachment 31457 View attachment 31458

Also his sibling is supposed to be a broken seal but again no seal or sable in the background for the 10+ generations I can see. Self chin perhaps?

Yes, you can have a sable chin, in fact it's a recognized color in Mini Lops. The C series (full color/chinchilla/sable/himi/REW) is riddled with partial dominance/recessiveness issues. When paired with chinchilla <cchd>, the sable gene <cch> tends to muddy the color and kind of mess up the ring definition: the chin blocks expression of yellow pigment, while the sable blocks both yellow and also some of the dark pigment, thus muddying the rings a bit.
If your other buck is a broken seal (and that is what it looks like in the photos), then it makes sense that your solid could be a sable *something*, and it does look sable-ish rather than chocolate in its tones, though that could be an effect of the photo/lighting/my monitor. If it was a chocolate chin, the lacing on its ears would be chocolate, but your rabbit appears to have pretty dark sepia lacing. On the other hand, he does not seem to have any hint of the shading that usually comes with the sable gene...
All that said, I'm not sure if your rabbit is a chinchilla at all; the surface color seems off, with too many white hairs standing out, and I am not seeing anything I can really identify as rings in the fur photo. My only experience with the sable chin color is in mini lops, where the ring definition was relatively poor, but it was identifiable, and the surface color gives the definite impression of an agouti. (I know someone who currently has a sable chin mini lop doe; I'll see if I can get a photo for comparison.) Anyway, I have found that ring color is usually more pronounced in a rex coat rather than less, so your buck is a little perplexing. Can you get a few other pictures when blowing into the coat, maybe along the flanks where sometimes ring definition is clearer?
I think judymac might really be on the right track with the observation that harlequin can do some really weird things to colors, including making a rabbit look kind of like a steel... your solid buck does look more like a steel with white hairs/white tips interspersed throughout his coat, rather than the defined rings of a chinchilla.
You say there's no sable or seal in the pedigree; what else is there in his background? (And are you sure of the chocolate chin identification of his parent?)
N

Thank you for the answers and explanations. I will try to get better pictures of ring pattern today. Here is his pedigree and while I’m not 100% certain on the colors listed I did see his dam and do believe she is a chocolate chin. This little buck is definitely making me scratch my head.

I can see the difficulty, other than the REWs that could be carrying sable, everything here looks chinchilla based or full-color. Of course, I've often seen chinchilla and sable colors confused, with all pearls assumed to be sable, and all ermines and magpies assumed to be chin. I'm still thinking that the real problem is that harlequin e(j) allele. 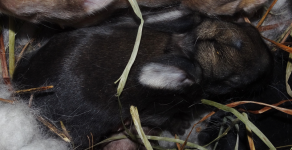 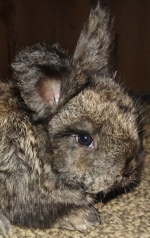 It doesn't look like a chestnut at all, looks more like a gold-tipped steel, but there is absolutely no steel anywhere in the line. I've never had a steel kit before. When I read about the tipping on Green Barn farm's chart, A/E Gene Combinations as well as elsewhere, I realized the issue was the harlequin recessive.
Share:
Facebook Twitter Reddit Pinterest Tumblr WhatsApp Email Share Link