Just had a gorgeous litter of Mini Lops from a new doe. Very happy with her and how they are turning out, but I need to know what colors the kits are--I have not experienced these color before, and am getting very confused! Dam is a Chocolate Chestnut agouti from two black chestnut agouti, but her grand sires and dams were black chin x orange and broken opal x chestnut agouti. I was told the sire was Smoke Pearl, and his pedigree show he came from a black GTS and broken sable chin--so possibility of that crazy steel hiding in there.

The kits themselves have very light agouti markings, reminiscent of steel and doesn't seem light enough to be straight agouti, but of course, what do I know. :lol: I have pictures from as early as day 1 in different lighting, but will probably need to include them as a reply.

Help would be appreciated as I need to know if they are accepted colors. 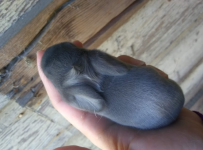 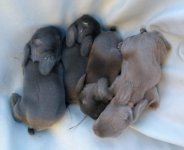 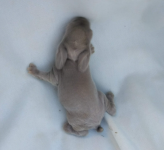 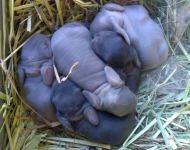 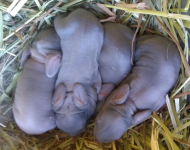 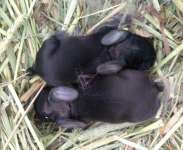 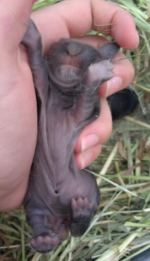 For the lilac like one, it may be a blue tort...They tend to change colors and get more blue as they get older but it can really throw me off....:/

First picture looks blue to me, but it could just be the computer monitor. Are the ears light enough that it'd be a blue agouti, I think that's called 'opal'?

AFAIK, there's a 'wild gray' agouti, then a more brown 'chestnut' agouti, and then color specific such as 'chocolate agouti', but there's not a 'chestnut chocolate' or 'black chestnut agouti' that I know of. The agouti is a color pattern with the white around the eyes, in the ears and the undercarriage so it's okay to add a color to the pattern name and get 'chocolate agouti'. But since 'chestnut' is a color, adding another color name to it such as black or chocolate doesn't quite work. Although, I only really keep track of angora colors and colors and color names change from one breed of rabbit to another so maybe it's the way it works with the breed that you have?

Just quick update, pretty sure all are steel based. One Black GTS, one sable steel (which would explain why as a baby it didn't look dark enough to be black or light enough to be chocolate), three blue GTS, and still unsure about the lightest one. Will post pictures later.

do you have current images?

What color am I...Lynx, fawn, something else??