Anyone using Angoras for meat?

They are so gentle that it should be easy to process.

They are so gentle, it can be hard to bring yourself to process them. :lol:

I agree with Zass, you could also say a NZ or Flemish Giant is calm as well. Angoras (what I know about them, I own and know most about 6 class breeds) Are smaller and have lots of wool, making their live weight seem much much higher than their processed weight -sale weight- It's much more profitable to use them as fibre animals. And not-to-mention their meat may not be as desirable because their breed was not developed for meat production.

NewZealands4Lyfe":3fpbfu31 said:
And not-to-mention their meat may not be as desirable because their breed was not developed for meat production.
Click to expand...

I find pretty much all domestic rabbits taste the same.
The meat specific breeds are heavily selected for fast growth meat-to-bone ratio, and large healthy litter sizes. They will always be more productive, but at the end of the day, culls from all breeds find their way onto a dinner table somewhere.

When if comes to angora, I'd rather raise for show or wool, or even unique pelts, and have meat as a by-product. Even though they are worth more alive than most breeds, selling them would be hard for me.
I've cleaned up some rescue angoras in the past, and the condition I've found them in has left scars.

I've crossed Angora does with a NZ buck, and had a good ,fast growing meat rabbit.
[They didn't grow as fast , or have as good conformation as a NZ xCali ]

Pretty much any angora can be sold for $50 as a 'wooler'. So, if anything, sell the angora rabbit and buy two lobsters? And that's at Hawaii prices for Maine lobsters, maybe you can get more lobsters per bunny in other places?

We have English angoras here and I have someone who will eat the culls for me. I'm not against eating them, if someone else would bop them on the head, I'd eat them myself but they're too friggin' cute for me to make them ready to process.

Fully adult, they're about a six pound rabbit. They're about eight to ten months old by the time they're almost adult sized. They put a lot of energy towards growing wool and they can have three to five inches of 'fluff' on them so even though they look huge, there's not a whole lot of rabbit under that fluff.

A lot of folks will mix them in with meat breeds to get a denser coat on the meat breeds. The long 'wool' of an angora is a double recessive, so if your meat rabbit has never had angora bred into it's line, then you'll not see any long coats on a first generation cross. Even if they do get the long wool, all the long wooled meat rabbits I've seen have been incomplete angora coats and do nothing other than mat like crazy.

A standard litter size for the angoras here is usually about six, however, lately I've started choosing them for litter size as well as fiber quality. We just had a litter of eleven, that's huge for an angora. They're seven weeks old and she has nine left. I don't know how that would compare to a meat rabbit breed since I've only raised the English angoras. But it seems to me, that the meat rabbit breeders would know a whole lot more about breeding rabbits than the angora people because the meat rabbit breeders breed a lot more rabbits.
G

All rabbits are made of meat!

If you want Angora get them, culls can be eaten, young stock can be sold.

For more meat faster - and lovely hides - get a meat buck to cross every now and then with your does.

My crosses gave me a lovely dressed out carcass, nice big loins, and not too far behind my NZs.
C

GBov, I'm curious- I have it in mind to get a trio of silver foxes for meat rabbits, with pelts on the side when I want to grow them a little longer. I hadn't considered angoras in the near future, bit rather an eventuality, as I'm interested in fiber arts and that.

CanineWild":3l5omnjf said:
GBov, I'm curious- I have it in mind to get a trio of silver foxes for meat rabbits, with pelts on the side when I want to grow them a little longer. I hadn't considered angoras in the near future, bit rather an eventuality, as I'm interested in fiber arts and that.

When I crossed rex to my one angora doe (worst mother on Earth, only ever managed to get three kits to weaning with many, many tries, nightmare doe) I got normal length fur, very thick. She was black and I got two blues and a black, if memory serves.

The entire experiment ran for about two years and then I ate them all. I had been trying for more Angora as I love fiber art but the second generation that had the Angora wool matted so badly that they took loads of time and gave back nothing of value.

When we try Angora again, it will be with proper bloodstock and will cross every now and then to rex, just for a few different hides.

When in doubt, do it!

Non-matting coats is one of the selection criteria for breeding around here. We've got some English angora rabbits that can go between shearings with no maintenance, but not all of them can.

When we tried hybrid angoras - note, this was an angora x angora cross, not anything other than angora breeds - there was still too much difference between the different angora breeds for the coat structure to breed true. We ended up with coats that mat a lot. The fiber wasn't as soft and it mats. The level of inbreeding dropped, but so did the coat qualities.

If bred for a terminal cross, then first gen angora x whatever would improve the density of the pelt. But if you're breeding for fiber, staying within one specific breed of angora may be the best choice.
C

Ah, thanks both, that's very interesting!

Mostly I'd be doing crosses like that if I felt like raising a litter for extra plush pelts as a single generation thing, then also eating the meat. More or less for a fun experiment if at some point I do get angoras for fibre. The angoras themselves would be bred properly to their own good matches if I wanted to make more of them for not eating purposes.

Shows what I know about angoras anyways- I actually had no idea their were multiple breeds of them! Of course, if I do get some someday, I'll be doing my due diligence in the research department

I think the first four are the only ARBA recognized breeds, although I could be switching the German & Giants. There's also a bunch of small fuzzy ones. Fuzzy lops, lionheads have a bit of fluff on their mane, etc., and I'm sure there's more I'm not keeping track of.
G

I just checked the going price for angora here in the UK and sticker shock indeed, between seventy and one hundred fifty pounds! :shock:

Precisely! The angora bunnies here are English angora so they're five to seven pound rabbits. (2.26 kg to 3.17 kg) Saves on feed over a large sized meat rabbit. I'll generally sell males for $50 US and females for $75 US although I could ask more but then there'd be more effort in selling them. I'm also in an area without very many rabbit shows and those are the folks willing to pay the most. 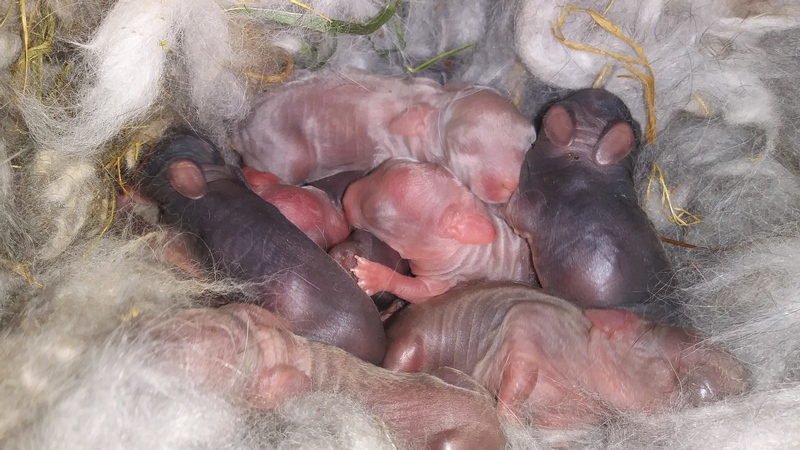 Nine more this morning! Folks on the waiting list should be happier now.
G

I take in a fair number of rescue animals... every single Angora gets culled to the freezer. Every single one has arrived in REALLY horrible condition.

I always caution breeders of wooled breeds to be really cautious about where they are sending their rabbits. The condition some of them end up in is absolutely horrible.

The cat always enjoys them. I keep the legs for myself and I've always enjoyed them as well.
G

ladysown":1hj2kpwg said:
I take in a fair number of rescue animals... every single Angora gets culled to the freezer. Every single one has arrived in REALLY horrible condition.

I always caution breeders of wooled breeds to be really cautious about where they are sending their rabbits. The condition some of them end up in is absolutely horrible.

The cat always enjoys them. I keep the legs for myself and I've always enjoyed them as well.
Click to expand...

We rescued one - dumped into our rabbit barn at 4H - and cut her free of her mats. Then managed to breed her - WORST MOTHER EVER!!!! - and bred back her kits to see if we could get anything worth having.

Wound up, with huge effort, with 4 rabbits that were in a perpetual cycle of groom them clear and by weeks end start all over again, they were always matting up or already matted up.

Just finished tanning the one hide from that era, it will work perfectly for the project at hand but knowing what I know now we started with crap, worked with crap, and ended up with crap...

If one wants proper Angora, pay for them!

Even at ouchy prices, sometimes one has to pay the full price for the genuine article.

Although, crossed to rex or NZW, we did produce some wonderful meat and hides so the entire project was not wasted, it was just a dead end at the time.

Some of the angora breeds, such as the English, will molt. That means that if the wool harvest is missed (there's a particular time when it's best to shear the bunny) then the wool will (mostly) molt off the bunny. Sometimes, though, even with an angora that will molt, the coat molting off will tangle in the one growing in and turn into a big mess. They also get 'wool block' where they try to groom the excess long wool off of themselves and ingest too many long hairs which create a hairball. Not being able to cough up hairballs like a cat, they then aren't able to eat. Which does not really have a good result. Especially if one is trying to grow them as a meat bun!

I try to sell the buns to folks who are going to spin the wool and take back any buns that they don't want anymore. Over the years, there's been a few show up in a complete mess, although they weren't any I'd sold. Really pointy barber's scissors will take off just about any matted coat, but it still takes a couple hours and requires a bit of knowledge of bunny physique as well as manual dexterity. Unless you're gonna do something with the fiber, they really aren't a good rabbit to get.

R
Rabbits castrating each other