Rabbitry set up ideas welcome! (anyone in a small shed?) : Other Ways to Profit from Rabbits

From vermiculture and selling rabbit manure to rent-a-bunny for Easter photographs, this forum is a place to discuss other ideas for making a profit from rabbits.
Post a reply
First unread post • 8 posts • Page 1 of 1

So my rabbity has been basically the same for 4ish years, since i started, and I started knowing nothing, a wee 12 yo and was hoping those who have wonderful setups, indoor, outdoor, everything, would comment some pictures! It would be really helpful and greatly appreciated

make your isles wide enough to comfortably work the cages... and clean...
[that was one of my early mistakes.]

Make sure the ventilation in the "rabbitry" is good,
even a little ammonia buildup, cause respiratory irritation, eventually leading to a"snuffles" outbreak...
[learned that the hard way ]

at first, i used the "normal" 24 x 30 commercial size cages, I decided over time ,that that size was too small for a NZ
doe with an 8+ kit litter. [although some commercial rabbitrys still use that size]
I prefer 36 wide cages, tall enough to make a perch for the doe to jump up on,to get away from the kits.
meat-mutt rabbits, a few laying hens.
Top

well I'm working with an 8x12 shed, doors opposite centered on the shorter sides, 4 cages on the left, a shelf & feed on the right, and outside against the right side is a 6 double cage
Top

This hutch was built about four years ago. It's the first of the 'modular' hutches so the floors and doors are a standard size and can easily come out for cleaning or replacement.

I tried making big feeders, but the humidity around here bollixed that idea. All the feed did was mildew. But the water system is good since the hutch doesn't need water bottles or dishes.

Now, four years later, I need to revamp the water system since the bunnies have worn some of the water nipples down, but those are easily replaceable. Three of the floor plates have needed repair, but since there's a spare floor plate, I just take the one in need of repair out and replace it with the spare and then fix that one to become the spare.

This is the second big 'modular' hutch. The floor plates match the first modular hutch, but the door sizes are different. The doors don't need repair as often as the floor plates, although I have had to put one new hinge on one door.

These modular hutches can be configured as one big space per level (there's two levels in each hutch) or made into one smaller and one bigger space or three spaces of 32" x 36+". Depending on the herd, they get shifted around. The first big modular hutch seems semi-permanently set up with six spaces and has become the 'Buck Hutch'.

The latest hutch is still sorta modular, but instead of coming apart easily, they're screwed together. Also one layer so there's no need to clean the roof of the lower level. 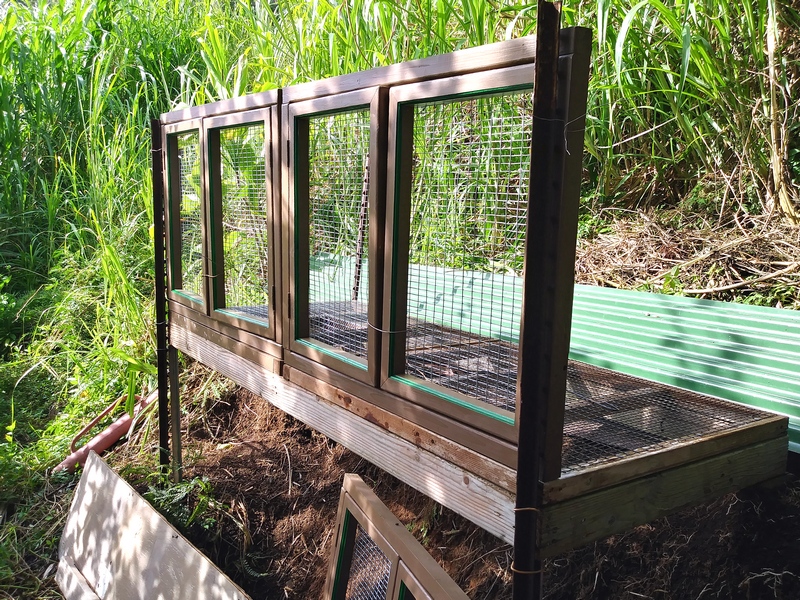 I don't have a completed picture posted online yet, so I can't link to it. This build was a bit fussy since it's on a hillside. The back of the hutch is basically on grade and the front is about 30" above the ground. There's a square 2x4 base made for the floor plates to sit on. On the bigger hutches, that was a long rail front and back with refrigerator racks for sides and back. This one has a solid plywood back since there may be some sort of predator and I don't want them staring at the bunnies through the back wall. All we have for predators, though, are feral cats, roaming dogs, mongoose, rats and ants. The last three are only dangerous to newborns, though.

There's also been experimentation with the floor plates to make them into 'nesting plates' and regular flat plates. Here's a nesting floor plate: 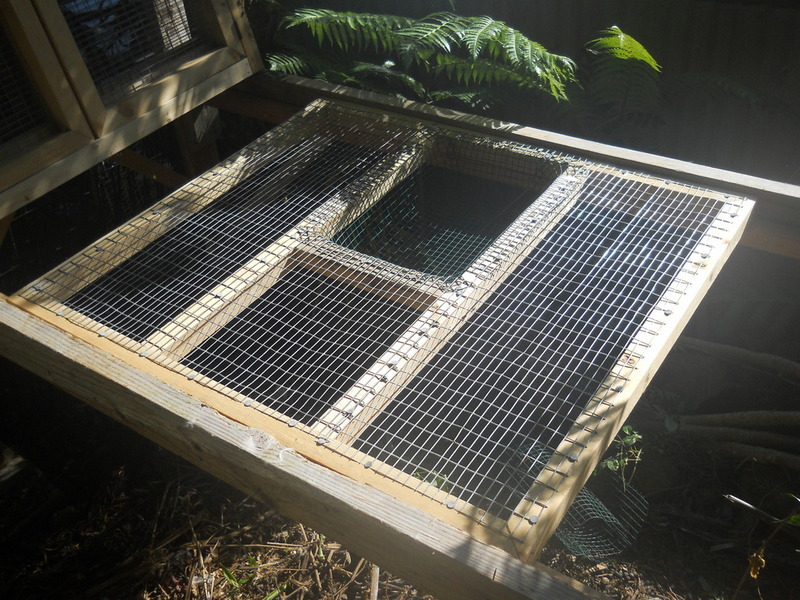 If the babies get dragged out of the nest, they can fall back in. 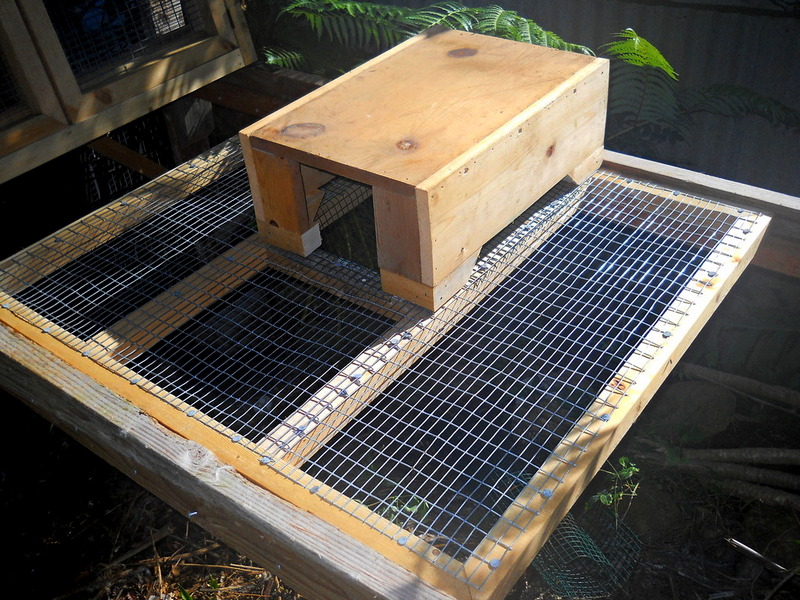 A box sits on top of it instead of the babies born in a box. This works pretty well for babies getting out of the nest and falling back in, however, the nest wool gets pushed out the wire bottom of the nest area, so I may put some fitted carpet scraps in there next time I find some carpet scraps.

The hutches always seem to be evolving and I suspect that there is no one 'perfect' hutch. Depending on what folks want to do with their rabbits, I'm sure each rabbitry will be different.
Hula Bunny Yarn from Hillside Farm Hawaii
http://www.hillsidefarmhawaii.com
Top

Hotzcatz , I like your nest box setup..
Do remove the wood part between litters??
meat-mutt rabbits, a few laying hens.
Top

Sometimes I leave the box there since that gives them something to sit on and climb over. But sometimes I need the box to be used somewhere else, then I'll cover the dropped area with a tile. At the moment, I have a doe with a litter in a standard wooden nesting box which is being used to cover the dropped area since she had already built a nest in it and I wanted to move her to the new nest area since it was rat proof and her previous area wasn't as secure. 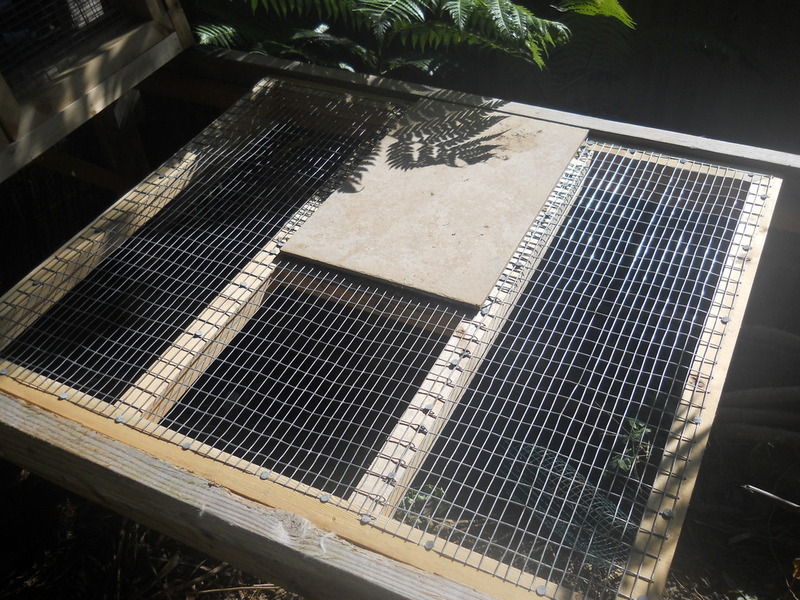 Although, there's nothing that says they have to have a flat floor, I think bunnies like having a more interesting space than just a square box. The bucks have benches that become a lounging ledge and sometimes they get a wooden box to hide in and climb on. I take the benches and other furniture out when there's a doe visiting a buck since she would hide under or in them, but otherwise the bucks seem to like their furniture, too.
Hula Bunny Yarn from Hillside Farm Hawaii
http://www.hillsidefarmhawaii.com
Top

Hotzcatz, --I have my "below floor" [Bass] wire nests, in the center near the front, in front of the door..
For easy access when checking litters..
I think a nest box cover like yours would be great with hinges at the side... I could slide the hinge pins out when the box needs to be removed...
My cages are outdoors, the box cover would provide an additional wind break in the winter...
meat-mutt rabbits, a few laying hens.
Top

Anyone have a rabbit shed of sorts?
Top
Post a reply
8 posts • Page 1 of 1