Growing season length, and average temperatures. : Around the Coffee Table

Growing season length, and average temperatures.
Although there is "theoretical evidence" to suggest we are moving into "cooler" temperatures,[and shorter growing season] at this point i don't see that backed up by any "real stats".
The discussion on "global warming" ,has become so "political" ,and "agenda orientated" , the information available is unreliable.
The information i see, shows a lengthening of the growing season, [and warmer average temperatures].
I am researching and experimenting with,..high calorie [250 to 500 calories / lb] food plants, that like warmer weather. [Irish potato has "about"347 calories/ lb]
So far, ...
the taro [colocasia esculenta] likes tennessee,and is very productive,and the corms overwintered under a thick mulch.[Taro corms -508 calories / lb]
The taro leaves are a nutrient rich food also. [see link below]
Most taro leaf ,has a long cook time, before it is edible ,IE non irritating to mouth and throat" don't eat taro leaf raw
the Chinese wild yam [dioscorea polystachya]
"about" 450 calories/ lb] 1/2 cup (100 grams), baked with skin: 116 calories, 0 grams fat, 27 grams carbohydrate, 4 grams fibre, 1.5 grams protein, 670 mg potassium, 12 milligrams vitamin C, 0.23 milligrams vitamin B6, .07 milligrams beta-carotene.
Is a weed here, and is very productive. [it is an 'introduced invasive" that was already growing in the yard] This variety seems to have adapted to colder conditions . In my experiments, the "seed" [aerial tubercles] will still grow after being frozen for a month.[an amazing adaptation for this variety]
The Yam, dioscorea rotundata winter killed.
The yam, dioscorea alata winter killed.
Turmeric has over wintered and is productive.[only has 180 calories / lb]
xanthosoma violaceum, is growing very well, i have not tried to "overwinter" it outdoors yet, I now have enough of it to give that a try. [The main value of this plant is for high nutrition ,extremely palatable, steamed, or canned greens]
So far, none of these plants seem to have disease, or insect problems.
Although,... there has been talk by "government agencies" ,of introducing insect pests to attack yam plants. At this point, i don't think this "act of stupidity" has occurred.
The "yam" is a major food plant, that has very few pests in North America.
https://www.thecoconet.tv/coco-talanoa/ ... ro-leaves/

This figure shows the length of the growing season in the contiguous 48 states compared with a long-term average. For each year, the line represents the number of days shorter or longer than average. The line was smoothed using an 11-year moving average. Choosing a different long-term average for comparison would not change the shape of the data over time.
Data source: Kunkel, 20162
Web update: August 2016

You are right, the entire topic has become so political that it verges upon the insane but I think you are right in your gardening, it is becoming hotter over all and the growing season seems to be longer.

After all, people are now planting olives in the UK which would not have lived not that many years ago.

Looking forward to getting my hands in the dirt soon so shall see how things grow over here now, it is a long time since I have gardened at this latitude.
Top

I can't wait to start gardening myself next year. I want to get a small one going with a lot of the Guinea pig favorites and a few beneficial things for the buns.
Top

taro leaf (called 'luau leaf' around here) is excellent for laulau. Take some chunks of cubed pork, about half a handful of 1" cubes, add a little bit of fatty fish, wrap them with several taro leaves, then wrap with ti leaf (cordyline terminalis) and then tie them up with string. Steam them in an underground oven if you happen to have one, otherwise steam with a bit of smoke seasoning in the steam. Not sure how long outside of an imu (underground oven) since usually we use an imu. Totally tasty!
Hula Bunny Yarn from Hillside Farm Hawaii
http://www.hillsidefarmhawaii.com
Top

hotzcatz wrote:taro leaf (called 'luau leaf' around here) is excellent for laulau. Take some chunks of cubed pork, about half a handful of 1" cubes, add a little bit of fatty fish, wrap them with several taro leaves, then wrap with ti leaf (cordyline terminalis) and then tie them up with string. Steam them in an underground oven if you happen to have one, otherwise steam with a bit of smoke seasoning in the steam. Not sure how long outside of an imu (underground oven) since usually we use an imu. Totally tasty!

I use banana leaves, and my pressure cooker @ 20 lbs ... cook time depends on the variety, Some leaves lose the itch at 30 minutes, other varieties need 2 1/2 hours. Some varieties are moist and tender, some have a dryer ,tougher texture... [we like moist and tender]..
I like Xanthosoma violaceum leaves, they are great just steamed for a few minutes... with a little butter, it is our family favorite .
meat-mutt rabbits, a few laying hens.
Top

Bananas and taro grow in Tennessee? That isn't usually a place one thinks of when considering bananas and taro. Have you tried bamboo? Some varieties of bamboo are really tasty and much more aromatic when cooked fresh than the canned varieties.
Hula Bunny Yarn from Hillside Farm Hawaii
http://www.hillsidefarmhawaii.com
Top

Bananas and taro grow in Tennessee? That isn't usually a place one thinks of when considering bananas and taro. Have you tried bamboo? Some varieties of bamboo are really tasty and much more aromatic when cooked fresh than the canned varieties.

My taro varieties are doing very well, the bananas are "non fruiting", but make good wrappers...
I have not tried any bamboo varieties since moving here, - but.. when i once lived 50 miles south of here, Yellow Grove Bamboo, grew very well in that area ... not the best, - but still yummy...- and great crop support material....
meat-mutt rabbits, a few laying hens.
Top

I finally got the garden organized and it will be ready for seeding tomorrow. This is the season for growing the things that like cooler weather like the soft lettuces, peas, cabbages, etc. I'd ordered seeds several weeks ago from Baker Creek (rareseeds.com) but just haven't had time to plant them yet. There's a pink celery that looks like it should be a fun veggie.

There's about 4" - 6" of bunny manure on the top of the garden. That's the only fertilizer we use, mostly because of the cost of imported fertilizer, but the plants seem to like it.

When will you be able to plant your garden?
Hula Bunny Yarn from Hillside Farm Hawaii
http://www.hillsidefarmhawaii.com
Top

hotzcatz wrote:
When will you be able to plant your garden?

I will start planting tomatoes , peppers, eggplant, -[and kale] in flats,- just as soon as this cold weather passes.
It is too difficult to keep the flats warm enough, in cold weather.., now that a "dead" minivan with an electric heater in it ,.. is my greenhouse.
Average last frost date is April 24
meat-mutt rabbits, a few laying hens.
Top

You’re way ahead of us hotzcatz! I’m in northern WV. We try to have potatoes in by the end of March, progressing to plants set by the middle of May. Though some years it can be early June by the time everything is in. These past few years we’ve had so much rain the garden is too muddy to work in when the time is perfect to set out plants.

We need to get our seeds ordered this week. We do a pretty traditional garden - tomatoes, beans, peppers, potatoes, carrots, and a few other things.

My husband has a small greenhouse and starts all our plants. He’s always enjoyed that. I on the other hand have a black thumb and am happy to leave the greenhouse work in his hands.
~Katie
Top

Here in northern NY we just set taps yesterday, hoping to catch an early sap run. Don't know how it will go with so little snow at the start of sugaring season. In the next 2 or 3 weeks we'll also be inoculating oak logs with shiitake spawn and starting the first seeds in our little greenhouse. Nothing gets planted outside until April.
Top

I'd like to try growing mushrooms, but shipping in the spawn is always too expensive and I never do it. Sigh!

All the veggie seeds have been sold out at our local hardware store. Since when does that ever happen? Fortunately, I'd already ordered seeds from Baker Creek. Their website went down for a few days due to too much traffic. They're back up, but out of a lot of varieties. All the seeds planted around here are open pollinated and/or heirloom so I can save seeds for the next crop. So, I'm set but still amazed at the demand for things due to this pandemic. Which is different than climate change.

FWIW, things are getting a bit warmer here, but they're also getting a bit colder, too, so I think it's a variation in temperatures and not just all in one direction. We are surrounded by the Pacific Ocean so that keeps temps pretty steady, but it's still been getting a few degrees hotter it seems in the summers. Up to mid nineties, I think it was last summer. Just for a few days but it was miserable. We don't have A/C since we have the highest electric rates in the nation. We don't have heaters either so we do want the weather to behave.

Growing season is always there, although what grows well changes during the year. We just finished the cooler crops and now the only lettuces that have a prayer are the romaines, reds and Buttercrunch. The rest and even those will go to seed really quickly.

Now we will switch over to beans, tomatoes, beet greens, celery greens and what little lettuce we can get for the salad bowl. I got a new variety of bean this year. It's called 'Greasy Grits' and they do hold their beans up nice and high for easy picking. 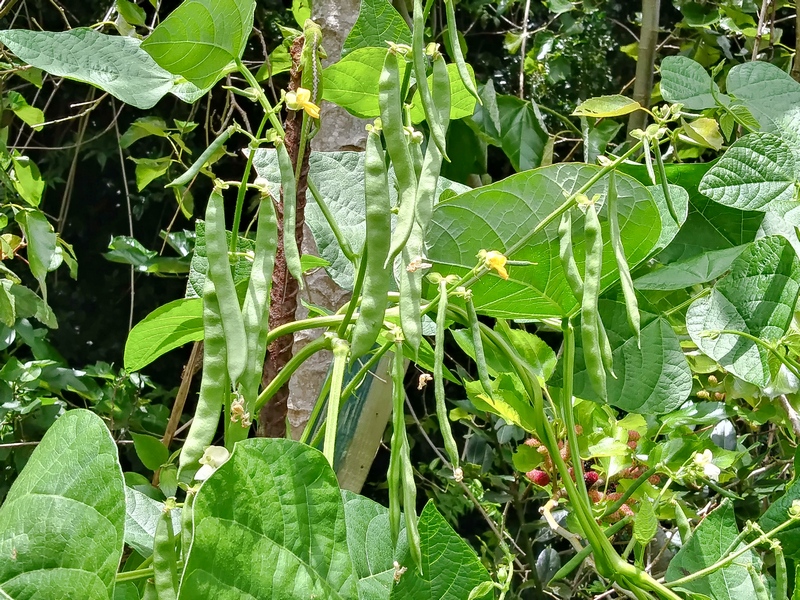 They are a string bean though, if they aren't 'strung' you'll know it when you try to eat them. Kinda fun as a finger food, though, unstrung green beans. These have good flavor and I'm thinking they may make a nice soup bean as well. Sweet corn was planted this year and it should be ripe around the first week of July. I'm kinda excited about that, it's hard to get good sweet corn around here.

And one of those pineapple tops I've been sticking in the ground looks like it's finally going to produce!

Pineapples take two years and don't always produce even then. I think I need to put them in more sunlight.
Hula Bunny Yarn from Hillside Farm Hawaii
http://www.hillsidefarmhawaii.com
Top

Users browsing this forum: No registered users and 5 guests