My Lucy is expecting her first litter. Walked out to feed this morning and she had her haystache going on LOL

Our new Mini Lop doe Spirit's Scarlet has been haystaching yesterday and today! Tonight she started pulling fur. This is her 2nd litter but first here at our rabbitry. She came to us bred. 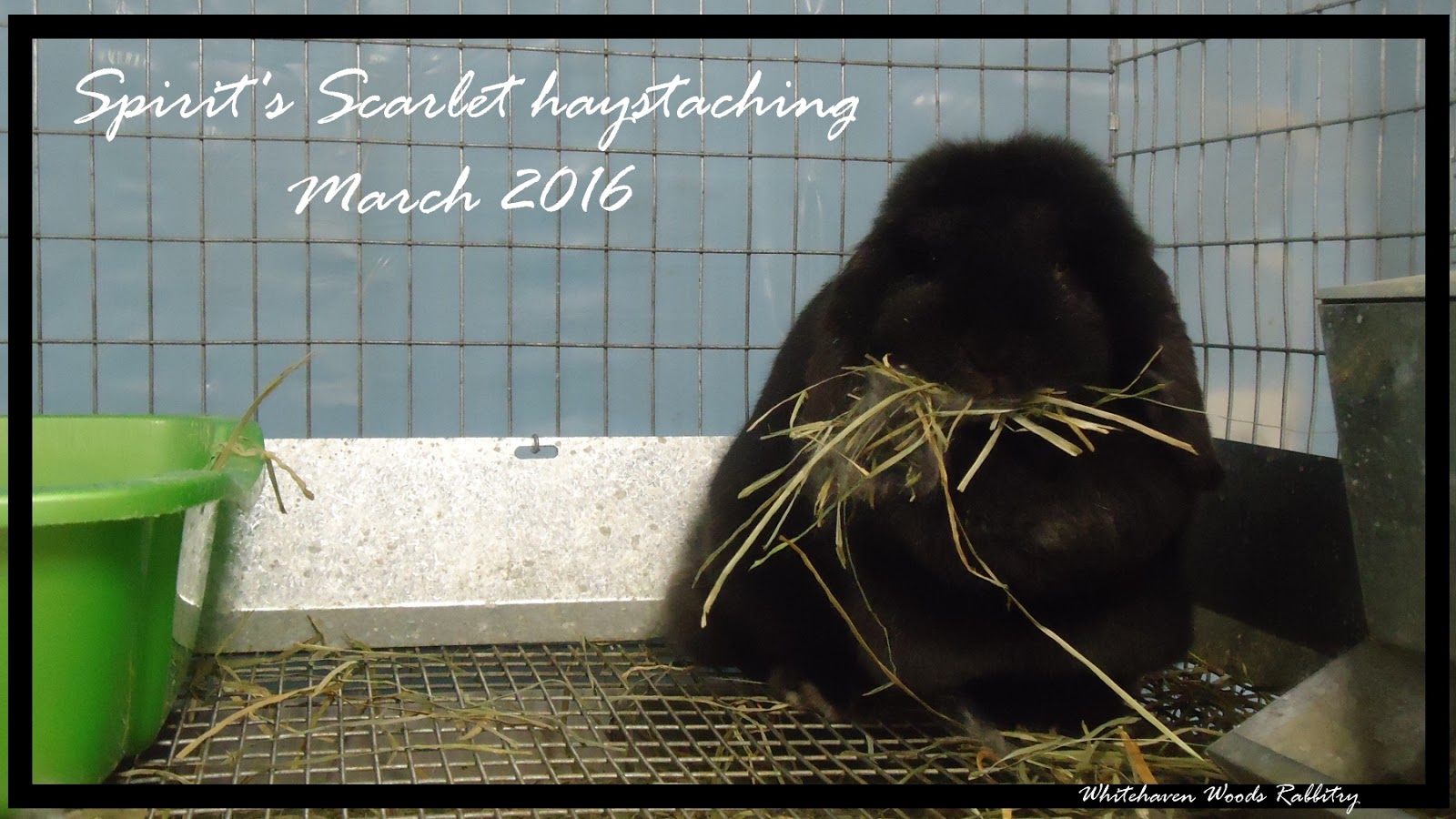 My first time doe, Sheri, has started hay stashing.... She's due 15th and I gave her a nest box .. so that kicked the hormones into high gear!

As of this morning all four of my does have hay stashed!
Breeding Czech Frosty & Magpie Harlequin Rabbits for Showing, Meat and Pelts...
Working towards a farm to raise animals with respect and care.
Amherstburg, Ontario, Canada

well, after almost an entire year of nothing but one DOA litter......i have haystaches. one expected, one.....totally unexpected. looks like i've got my self a 'no lift, no falloff' litter. or a falsie! but considering that she has a haystache of this calibur, i'm expecting the bunny christ. that's an entire fistful of hay she has in her mouth

I get so excited when hay stashing starts.... I have a doe that likes to start at week 2... I like to mess up her nests to keep her busy for the next 2 weeks...lol

Congrats!!
Shazza... that is one serious hay stash!!
Good luck and keep us posted. (this means we want pictures)
Breeding Czech Frosty & Magpie Harlequin Rabbits for Showing, Meat and Pelts...
Working towards a farm to raise animals with respect and care.
Amherstburg, Ontario, Canada first-time silver fox doe doing a great job of nest building yesterday. i love when they sit in the nests like this <3 later she hopped out for a rest but she kept a little haystache for probably an hour before she finally ate it :p

Here is are 2 photos of my one doe Anastasia... first one was her showing me her haystache for her first ever litter...

And second one is the same doe with a furstache... wondering why I'm bothering her mid plucking!

my Black Fury at it again, in vain, poor girl, it's a false pregnancy. She dug a nice tunnel under my lilies and roses, filled it with hay, and before I could stick the camara in to make a picture of the nest the tunnel was gone, except for a patch of fresh dirt. She has that habit to seal off her tunnels, also the nestbox entrance always gets stuffed tight with hay.

wow, preitler! That is one impressive 'stach!!!

Our Four Ring Farmstead journey will be on hold for a few years as we take on a new adventure in WV! Maybe a new focus on gardening in a cooler climate...
Top

Funny thing is, with a stache like that she didn't see where she was going (well, running, this rabbit does nothing halfheartedly), when I took a peek at her tunnel she barreled full speed into me. It didn't last long, but it was a frenzy.

I love this rabbit, she is so "all or nothing", great mother, fierce fighter (sigh), fast digger, confident owner of everything, cuddly bun demanding nose rubs...
Top

I got a good one of Nova the other evening. She had 8 for me. She is such a good girl.

My elder-doe decided that for litter number three, a haystache was necessary!

The photo is a bit terrible: She refused to sit still. The 'staching was frantic, despite having 9 more days until her kits are expected to arrive. She seems calmer now that she has a nest all prepared. I gave her the next box expecting her to play in it, make a half-finished nest, and then soil it. I thought she'd have a good time, and I'd just have to clean one of the nest boxes (there were clean ones on hand, so no big deal in the end).

Instead she's keeping it immaculate and starting to line it with fur already! I'm starting to wonder if I should leave her masterwork in there with her and let her use that one...
Raising purebred French Angora in Alberta, Canada
http://www.angoryrabbits.ca

First time mom & nest builder. She did such a great job. After she built her nest she sat on top of the box for hours admiring her work. Her kits are 12 days old now and thriving, couldn't ask for a better mom!

Users browsing this forum: No registered users and 7 guests