Crazy, Massive Plan : Other Ways to Profit from Rabbits

From vermiculture and selling rabbit manure to rent-a-bunny for Easter photographs, this forum is a place to discuss other ideas for making a profit from rabbits.
Post a reply
First unread post • 11 posts • Page 1 of 1

On top of the compost pile, where the freshest manure is emptied, dropped BOSS sunflowers sprout. They sprout all year around, but only survive until the next hard freeze. In the spring though, I take a shovel and carefully scoop deep enough to keep all the roots, and I transplant the sprouts to areas I want the sunflowers to be.
Sunflowers aren't known for transplanting very well, but using this method, many of them do succeed.
These are seeds from the BOSS bags. Hardy, tall, insect-resistant plants.

I am composting as much as I can, raking leaves, visiting places for paper they'd otherwise trash, scraping up the hay the goats don't eat. All of it is composted. But this year, I need LOADS. 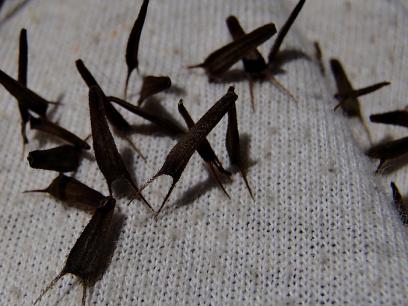 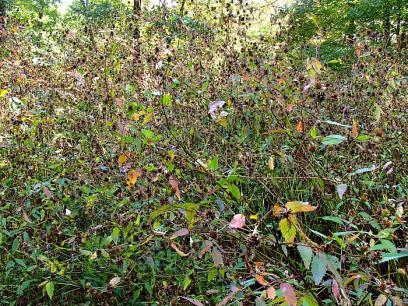 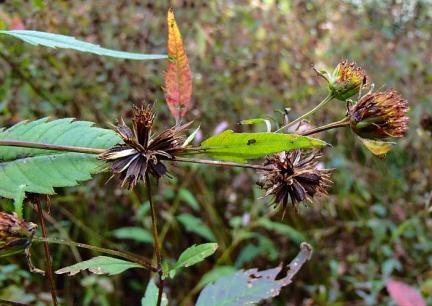 Some plants are just a few inches tall, some are six feet. Dry as a bone and they drop those prickly burs with the lightest touch, the lightest puff of wind, and you can't weed wack them, hand cut, pull up, or stare fearfully at them without coming away covered and itchy. I hate them.
Had a bush hog service come in to cut what they could, but the rest I'll have to do by hand. Like I said though, even a light touch and they drop seeds. Seeds that will be back with a vengeance next year.

Two years ago, I covered about an acre of land with cardboard, and filled it with layers to compost over the winter. This method is called Lasagna Gardening and it worked WONDERFULLY. I was actually ahead of the weeds this way (they have a hard time coming up through the layers of cardboard the first year) and I had the best yield ever with everything I cultivated.
So I am thinking of trying the same with all of the beggar tick areas. Cover them with layers of cardboard, compost, compost, compost, and plant what I want to see growing. And although I have plans for several things, I know I will not have enough compost to do it all.

But sunflowers have been so easy to grow in those plops of rabbit manure that I was wondering if I could get away with a scoop of topsoil/compost, and dropping a sunflower transplant in manure on top of that with a little mulch. Sunflower is VERY resourceful and roots will break through rock, so cardboard shouldn't be too hard but... I might poke a hole under each one just in case. Planted about 8" apart, with 30" row spacing, just a couple of scoops of mix each planting... It would hopefully allow me to reach most of the areas if I could stretch out my resources this way. In some places I might be able to try weed killer. I do as much weeding by hand and mowing, and weed whacking as I can, but I couldn't keep ahead of them this season so I don't have much hope for next either.

Will it work? I don't know. But I've got to try SOMETHING. If nothing else, I will have ugly cardboard everywhere but flattened beggerticks beneath it is better than having them standing like a killer hedgewall. And this way, it will give all the little prop planes that fly over something to scratch their heads about. "What in the world is she doing down there?"

Hey it can't hurt to try! Do let me know how well it works though. I am all for getting rid of thistle plants that I don't want.
Top

ID your thistle plants, Sagebrush! Many of them are bunny treats! I have bull thistles... they're not fun, but the rabbits love them!

Hope your lasagna yard works, Duman! I am sure those plants would drive me equally nuts, and this sounds like it might work.

Thanks for the chimes of support! I will be happy to share the results - and I hope it works for you too, Sagebrush!

Miss M's idea of ID'ing the thistle for possible uses could be handy if you haven't yet; but even if you kept a patch and hand picked the rest it would be no fun OUCH! I don't know what kind we had years ago up North, but the thorns were so long that they would pierce through leather gloves. Our best option was to dig them out by shovel, and dry them in the driveway in a sunny spot. One of the donkeys loved thistle if it was dried first, but she was the only animal we could convince

I have those Velcro like seeds here as well, some of mine have fuzzy leaves that will stick to fabric too, my rabbits will eat them but they are not their favourite.

When we first moved here we lasagna gardened like crazy as the prior owners had let everything go wild - even the lawn was mostly weeds cut down to 2 inches :/

An alternative may be a controlled burn on the affected area's .... plants , seeds & all get burned and leave those nutrients & minerals behind in the process.
Hindsight is always 20/20 but looking back its still a bit fuzzy.

I think it's a great idea! Sunflowers , like you said, don't usually transplant well, but once they get established they are hardy little buggers. I would probably plant a tad closer together to help keep them upright.

And for the areas you can't get to this year, maybe try some vinegar and water sprayed on the thistles as they start to come up in spring. We are actually winning our kudzu battle like this.
Bird House Farm
Organic heirloom farming on a small scale
Top

How large an area do you have to cover? And when you did the "lasagna" method before did you overlap the cardboard and if so how much? We tried cardboard covered with sawdust or woodchips for the paths between our garden beds but the weeds came up between the pieces. Maybe we didn't pile stuff deep enough. Our most worrisome weed problem is horse nettle (Solanum carolinense). We've had some for years and it's supposed to be seriously toxic to goats so we've tried to keep them away from it but have seen them eat it and not seen any effect. But in the last year or so it is really spreading. At least some of the weeds we can cut and feed--like the multiflora rose which is seriously invasive here--but I know no use for the horse nettle.
Hope you'll let us all know how the plan works out.
Top

If any heat or light reaches the seeds they'll sprout and the lasagna effect won't work so it does have to be pretty thick.

We use 18 inch strips of old carpet to walk on between our raised beds as it lasts several seasons before a new runner needs to be laid down.

I think your plan sounds great, Duman! Those thistle seeds look like pure evil, so anything is worth a try to eradicate the monsters.

I have used the "lasagna" method as well, sans cardboard. We have earwigs here, and corrugated cardboard is an ideal habitat for the little buggers. Furniture stores are a great source of cardboard boxes if you need more of those.

I don't know if the big leaf raking season is over already where you are, but if not, maybe you can post an ad on Craigslist that you will rake leaves and haul them off for a small fee (or free) and get more material that way. Or you could contact the caretakers at local parks or colleges and see if they will let you "harvest" compostables... I'm sure they would be more than happy to let you do their work for them.

Honey
Honey Rowland of HoneysLife.com
"Organic since it was a dirty hippie word."
Top
Post a reply
11 posts • Page 1 of 1